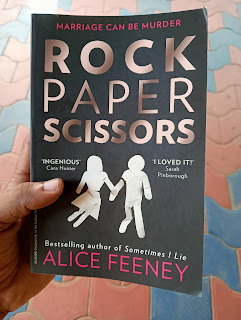 Alice Feeney's Rock Paper Scissors is one of the few genuine thrillers I have read for a long time.

Adam and Amelia are spending the weekend in the Scottish Highlands. Adam is a successful screenwriter, and Amelia is his wife. The remote location is perfect for what they have planned. But can they trust each other?

Though none of the protagonists, be it Adam or Amelia, are likable characters, I think the author is justified as he has made up for it with the twists which happen towards the climax and explains why they are written the way they are.

As mentioned earlier, though there are only a handful of characters in this 300+ page-long thriller, the author gets full marks for making this one genuinely entertaining with the suspense intact. There are a couple of killer twists she has reserved for the climax, and the moment you think that you have figured it out, Feeney pulls the rug under your feet with yet another killer twist. The tail end portion with a tinge of horror is also dealt with nicely.

Coming to the characters, though there are only a few, it's the character of Henry Winter, the best-selling writer, who gets the reader's sympathy. Though in the initial portions, he appears to be a self-centered man who is full of himself, how the character gets revealed towards the climatic parts of the book blew me away. I think Robin, the hermit, also evokes similar feelings in the mind of the readers. Though she comes across as a lady with evil intentions, initially, you start rooting for her once the mystery about her is revealed. Though some of her actions are genuinely questionable, it doesn't matter as the author has managed to make her convincing to a more significant part of the narrative. The writing is fast-paced and is peppered with twists at regular intervals. Full credit goes to the writer for getting the atmosphere right. The Scottish Highlands, the converted Chapel, and the setting have come across well and set the Novel's mood right from the beginning.

On the downside, some of the great reveals were a bit contrived. The mystery around the disappearance of an internationally acclaimed best-selling author like Henry Winter was pretty hard to digest. Though Feeney has tried to make it sound convincing by making him an introvert and hermit, the supposedly shocking twist surrounding him became a cropper just because it appeared silly and illogical.

On the whole, this one is an entertaining read.

Posted by nikhimenon at October 08, 2022
Email ThisBlogThis!Share to TwitterShare to FacebookShare to Pinterest
Labels: Alice Feeney