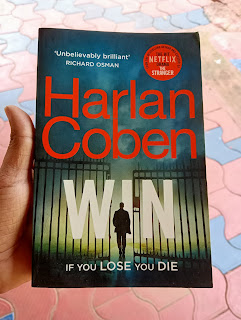 On Newyork's Upper West Side, a hermit is found murdered. The investigating officers have yet to find his identity,but Windor Horne Lockwood (Win) is called to the crime scene, as some of the articles the victim left behind seem to have a personal connection with him. Pretty soon, Win figures out that the crime has a connection with not only him but also his cousin, Patricia. With so much at stake, including his family's reputation and personal fortune, Win decides to solve the mystery in this fast-paced thriller.

True to his style, Coben has delivered a solid thriller with Win. The plot twists keep coming at regular intervals, and there is never a dull moment in this 400+ page long Novel. The fans of the Myron Bolitar series will definitely enjoy reading more about their favorite sidekick's adventures. Those who regularly follow the series might recall that Windsor Lockwood III has always been an anti-hero who doesn't hesitate to give a punch, even at the cost of being politically incorrect. Full credit goes to the writer for not diluting his character trait to make him a bit more likable, as he is the protagonist here. You get Win, as he is! In the intro sequence (with that terrific scene at Indianapolis Lucas Oil Stadium), Coben establishes his protagonist and his ways with great success.

As mentioned before, this one is a genuine page-turner, and as the secrets of the Windsor Family are revealed one by one, the reader is also aghast along with Win. The climax is also brilliantly done with all the loose ends getting tied up. The supporting characters in the Novel are also etched out well.

On the downside, the pace slackens towards the middle of the story, and some cliffhangers didn't work that well for me.

On the whole, this one is a paisa vasool thriller which is racy and entertaining.

Posted by nikhimenon at October 05, 2022
Email ThisBlogThis!Share to TwitterShare to FacebookShare to Pinterest
Labels: Harlan Coben