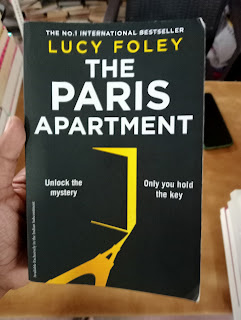 When your previous work is a Global Best Seller, you are likely to get confused when you are about to start with your follow-up Novel. On the one hand, there will be tremendous pressure to churn out something similar to your previous work so that Your fans don’t get disappointed. At the same time, the creator in you might constantly be nudging you to try out something drastically different. This constant tussle can put you into a tricky conundrum. Lucy Foley, the author of last year’s global hit, ‘Guest List,’ is back with her follow-up work,’ The Paris Apartment.’ When I picked up this Novel, I had kept my expectations considerably low as the previous experience with another follow-up Novel was still fresh in my mind (The Maidens).

So, has Foley given us a decent enough thriller after her global success? Though this blog post is going to be strictly about that, for those readers out there with limited patience to go through this long post, here is my take- the author has succeeded in finding the right balance between retaining the flavor of her previous smash hit and, bestowing a distinct identity, for her follow-up work in  ‘The Paris Apartment.’

Told from multiple perspectives, ‘The Paris Apartment’ might not be entirely fresh, but it is undoubtedly an entertaining read. As the title suggests, the setting is an upmarket Apartment in Paris. We are introduced to Jess, who came to Paris from London for a fresh start. She is half-sister of Ben, who had recently moved in here on the persuasion of his childhood friend, Nick. Jess has had some run-ins with the law in her home country, and she has moved to Paris to start a new life here with the help of her half-brother. But when she reaches her brother’s rented Apartment, she is aghast to find that he has suddenly gone missing but not before leaving clues in the form of a WhatsApp voice message. The other inhabitants of the swanky Apartment, except for Ben’s old friend Nick, seem unwelcomed by her presence, and pretty soon, she discovers that each one of them is hiding skeletons in their closet. What happened to Ben and how Jess manages to solve the mystery is all this Novel is about. Old Love, Family Secrets, and a Past Crime catch up in this page-turner.

The plot structure and the narrative style of Paris Apartment are pretty much similar to Guest List. We have a host of characters in a closed setting, and the story is told from multiple perspectives. Right from the beginning, the reader feels that something sinister has happened somewhere but just as in ‘Guest List’ till the Novel reaches its third act, the author cleverly conceals the ‘who’ and ‘what’ of the central suspense. The chapters are short, but the detailing is apt, with the reader getting a vivid description of Paris and the posh Apartment where the story unravels. I liked how each incident is narrated from different perspectives and how the author has tried to build anticipation. Agreed, some of the cliffhanger endings fall flat, and the reader rightly feels cheated when the ‘other side is unfolded in the very next chapter.

One major issue I have with the book is that the core suspense in the tale is not that fresh, and if you are a genuine fan of this genre, there is a high chance that you figured it out much before the author intended it! Also, some of the attempts by the author to pull off thrills fall flat. Most initial chapters had (silly) red herrings, which were annoying after a point. Common, what is the point in creating so much drama in each chapter when you already know that nothing much is going to happen in the very next chapter? Ben, Jess, Concierge, Sophie, Antonie, and Mimi are some of the other characters in the story, and none of them, including the protagonist, are likable, to be honest. Infact Jess also behaves in a pretty idiotic manner at times. Also, towards the climax, the author seems confused about the choice of ‘villains’ in her story!

Overall, The Paris Apartment is a fast-paced but passeable thriller. It’s not bad, but not that great either!