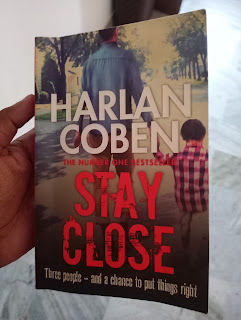 Whenever I suffer from reader's block or (even writer's block, for that matter), I turn to Harlan Coben! All these years and with so many books under his credit, Coben has never failed to surprise me. Almost all his books have been genuine page-turners for me. (I haven't read his adolescent-friendly Mickey Bolitar series, though). Stay Close was first released almost a decade back, and Netflix has recently made it into a mini web series.

Stay Close has three parallel tracks. In one, there is Ray, a talented photographer with a troubled past. Parallelly, there is the story of Megan, a Suburban Mother who also has her secrets. In the third, young men are disappearing from the city in the most dubious circumstances leaving behind the traces of a serial killer behind the act.

The author succeeds in keeping the audience guessing to a large extent. The language is pretty simple, and Coben has tried to make the proceedings enjoyable by throwing in twists at regular intervals. There aren't many characters in the story, and the reader can easily keep track of each one of them without getting confused. The novel also has surprise appearances by some of the iconic characters from the Coben Universe towards the Climax.

Coming to the negatives, I felt that this one had severe pacing issues, unlike Coben's previous and follow-up works. Suspense and unexpected twists have always been his forte, and In that regard, Stay Close is undoubtedly underwhelming. The regular readers of the author might also find most of the twists underwhelming and even a bit ridiculous. At 350+ pages, the novel is a bit too long, and that subplot involving Megan's mother-in-law could have been quickly done away with.

On the whole, Stay Close is an okay read. If you are a diehard Harlan Coben fan, you can give this one a try!