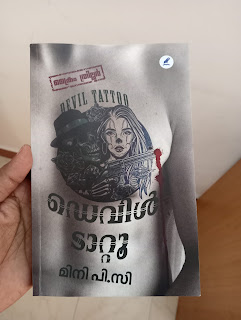 Malayalam Crime Fiction is going through a golden period now. Gone are the days when crime Fiction writing was looked down by mainstream critics and publishers. More young writers and publishers are not only coming up with their titles; the better works among them are also getting lapped up by the readers. Mini P.C's Devil Tattoo from Mathrubhumi Books is a crime thriller novel set in the backdrop of West Kochi and the thriving tattoo artists residing there.

Kasim is the personal Chef of Ronaldo Douglas, the dreaded Don of South Goa. The latter is hugely fond of Kasim's Naadan dishes, and as the adage goes, he has found his way into Don's inner circle through the excellent meals he cooks for him. But things go wrong when his sons go missing, and the Don has every reason to believe that Kasim is in some way connected to their disappearance. Left with no other choice, Kasim runs off to West Kochi and finds his hideout in West Kochi with the help of his old friend Vincent. In West Kochi, Kasim finds company in Pranchi, Veroni, Ann Lucy, and life slowly settling down for him, but soon a series of mysterious deaths get reported from the town. Grossly disfigured bodies get piling up, and the local Inspector Ravi starts investigating the case. With Kasim and the events surrounding him and the seeming act of a serial-killer happening in what appears as two parallel tracks in the beginning, as the story progresses, twists are thrown in at regular intervals making the reader question the real identity of each character. Who is Kasim? Who is the 'serial killer on the loose? Why are the victim's bodies mutilated with mysterious tattoos on their torso?

Unlike some of the recent Contemporary crime thrillers in Malayalam, which only focus on delivering instant shocks and surprises, Devil Tattoo has a solid story of revenge and redemption to narrate. The language though pretty simple, has a literary flavor and might appeal to those who are also looking for some degree of academic quality. The world and the characters that Mini P.C builds in are so lively and set on a vast canvas. The dark underbelly of the Tatoo Industry has been touched upon, though a bit topically, in this Novel. The characters, be it Paulettan, Veroni, or Hena, are tangible yet believable. The culture and life at West Kochi also become an integral part of the narrative. Though the book's cover page indicates that this one is a "crime thriller," which it certainly is, I must say that it is much more than that. Devil Tattoo is the story of a few hapless people, their troubles past, and their efforts to seek redemption.

On the downside, I felt that at 240+ pages, the book is a tad too long for a crime thriller. Towards the beginning, the writer seems to spend too much time narrating the backstories of every character who comes into the picture. Some of it could have been quickly done away with. Also, the investigation part is underwhelming, with the principal investigator, Ravi, not adding much to the story. The climax also felt a bit clunky, with too many things happening in a pretty short period.

On the whole, Devil Tatoo is an engaging read.You won’t regret buying this one!