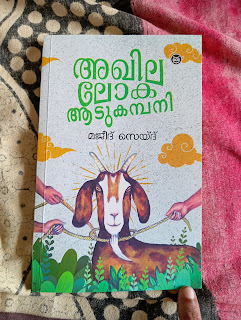 Majeed Sayeed is one writer with that uncanny ability to derive humor from innocuous situations. Like his previous work, ‘Chembilammini Kolacase,’ Akhila Loka Adu Company is a humorous take on the state and the society we are living in. Part social satire, part allegory, and social commentary, ‘Akhila Loka..’ is a novel that sees the world we live in through the eyes of Pokkar, a twice ‘converted’  male goat.

The novel almost reads like the life story of the Rajasthan-born, Kerala-raised “Pokkar Aadu,” but I must say that this one is indeed a well-written social satire. The world that Majeed creates is so vivid and lively that once you start reading it, you can’t put this down until you finish reading it. The author has no qualms in making fun of most present-day quandaries.

The characters are a good mix of humans and animals, but often the line gets blurred, and one feels that the animals are far more civilized than their human counterparts. The novel has a wide array of characters: Baby, Balkis, Chekkutty, Lilly, and Pratap Singh. The writer has also poked fun at the Malayalee Psyche of ‘treating anything as holy’ at the slightest instigation of half-truths and part-boiled facts. The ‘Lilly-Holy Goat’ episodes are a hoot. At just about 70 pages, this one is a fast-paced read! For Majeed, the goat and the setting are just a prop to drive home some pertinent statements. There are no holy cows in the world that he creates. To the writer’s credit, he has successfully weaved in the themes of Casteism, regionalism, and communal undercurrents in the narrative in a very subtle but effective manner.

Through the mind of the Pokkar, the author also reminds us of some essential life lessons. So when he laments that “we are far better than humans who get rid of their parents when they fall ill” or when he quips that “it is better to end up at the dinner table rather than continuing living in the world dominated by humans,” one can’t agree more!

On the whole, this one is a thought-provoking read! If satire is your cup of tea, go grab a copy now!