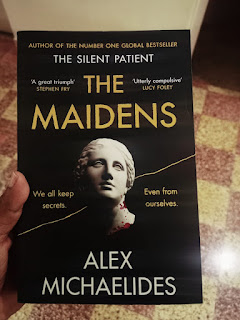 'Silent Patient by Alex Michaelides was not only an international best seller but also one of my favourite thrillers of all time. Alex's world was profoundly atmospheric and enthralling in his debut work, replete with twists and turns. Having had a debut success of that magnitude behind him, his follow-up work 'Maidens' was undoubtedly one of the year's most anticipated books. Has he managed to hit the bull's eye this time around? Let's have a look.

Maidens is the story of a group therapist named Marianna, mourning the loss of her beloved husband, Sebastian. She gets to know that her niece, Zoe, a student at Cambridge, has just lost her best friend. Without wasting time, she leaves for Cambridge only to find that the police have arrested someone she thinks is innocent. Will Marianna manage to find out the truth? The book essentially tries to unravel this mystery.

It's a well-known fact that writing a follow-up book for your debut best seller is a highly daunting task. It's a double challenge. You are attempting to please the fans of your previous work and win over those who hated it in the first place.

While 'The Silent Patient' had a novel premise, 'The Maidens' is a generic thriller, at best. The writer has tried novelty in the narrative by throwing Greek mythology in between. But to be very frank, those bits felt forced and didn't gel that well with the main plot, unlike in the first book. The plot twists are hardly unpredictable and, at times, are pretty illogical.

Towards the climax, the antagonist reveals to another character making a significant revelation –' they were just a distraction, a red herring.' Though the author has presented it as a 'big reveal,' most of the discerning readers might have already guessed by then that a massive chunk of the scenes preceding it was also nothing but distractions or red-herrings! This also sums up exactly what is the major problem with the book. A significant portion of the novel is spent on the protagonist's paranoid obsession with a professor named Edward Forensca and his secret study group. To give Alex due credit, it works in the beginning. Still, as the story progresses, it becomes pretty evident that the 'secret' study group is also nothing but another red-herring.

The book is told in a third-person narrative focusing on the protagonist Marianna and her inner demons. The characters are flat and one-dimensional, with the only exception being Fred. The climax has got two big reveals. Though the first one (about the antagonist) was entirely predictable, I must confess that I didn't see the second one coming. It was perhaps the only high point in the narrative as far as I am concerned.

The principal narrator of Silent Patient, the renowned psycho-therapist Theo Faber, also appears in 'The Maidens' towards the third part of the story. (Well, I don't want to reveal any spoilers here, but I must say that the appearance of Theo did help the narrative elevate a bit). The scenes involving Marianne and Theo were well written, I felt.

But all these little attempts don't help this from becoming a half-baked attempt.

On the whole, 'the Maiden's' is not a boring book. It's pretty racy and entertaining. But with its cliched plot and illogical twists, it's no great work either. If you are pretty okay with generic thrillers, you can give this one a try. But don't expect a 'Silent Patient,' you might get disappointed!

I liked the way Alex ended the novel by bringing in the characters from his previous work. I wish the rest of the book were also that much fun!