The Rumour by Lesley Cara 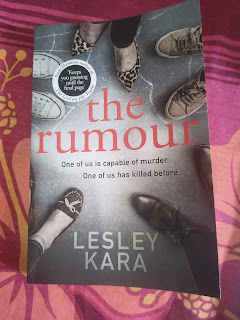 Lesley Kara's debut novel, 'The rumour' is the kind of book which tries too hard to be your generic fast paced thriller. The story is set in a fictional idyllic beach town, Flinstead, some where in England. There is a rumour slowly gaining momentum in the town about a rehabilitated child killer residing in the town albeit with a different identity. Our protagonist ,Jo turns out to be the one who has inadvertently set the rumour-mills burning and she along with her partner, Michael have to set things straight and find out the truth behind this rumour,if any. The book also try to delve upon themes including child abuse, bullying, rehabilitation, the effects of rumour mongering in the lives of innocent people to name a few.

The book is packaged like a generic thriller with twists and turns happening at regular intervals. But to be very frank, this one didn't work for me as a thriller. Though I totally understand the writer's intention behind choosing a theme and premise like this, the way it has been narrated, leaves a lot to be desired. The occasional twists are quite predictable and even the final reveal is pretty generic, in my opinion. Michael ends up being a caricature and Jo is quite a bit plastic character. All the supporting characters are pretty under developed ( we never get to empathize with any of them) and quite often the reader doesn't care whether it is Kay or Karen who is there in a particular scene. Having said that, I must also confess that the book worked for me in an emotional level at times. The narrative is too slow for a thriller and nothing much really happens for the major portion of the story. Infact, it would have been far better if the writer had tried to narrate the emotional journey of Jo and Sally rather than trying to make it an half-baked thriller.

On the whole , I rate this book as an average thriller.

Posted by nikhimenon at May 22, 2021
Email ThisBlogThis!Share to TwitterShare to FacebookShare to Pinterest