Day of the Accident by Nuala Ellwood 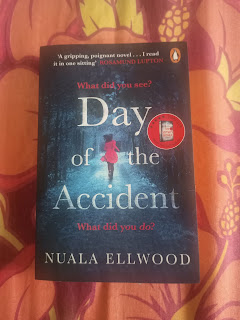 ‘Day of the Accident’ by Nuala Ellwood is the typical, generic crime thriller which revolves around the memory loss of the unreliable female protagonist and the circumstances in which she has got entrapped in. If you are a regular reader of this genre, there are chances that you might find this one as a pretty ordinary work.

So, our protagonist is Margaret Allen, who has had an accident which left her daughter dead and herself in a deep coma. After waking up from coma, she realises that her husband has gone missing and the house which they lived in has been bought by someone else. To make matters worse, she also figures out that her bank balance is also almost empty and she has got just about a few pounds left for her survival. Shattered and Puzzled, Maggie, with the help of her social worker and carer sets out to find out the truth behind this mystery.

To give due credit, I must confess that the author has got a pretty decent premise for the story. The pacing is also fine and the story progresses with a few minor twists happening at regular intervals. The narrative is mostly first person, the only distraction being the portions which appears in the form of the ‘letters written by Elspeth’. At just about 370 pages, the book is a fast read.

Coming to the negatives, the story suffers from logical issues at multiple places. It’s difficult to understand why no-one else in the village apart from Barbara manages to identify Maggie and tell her what actually happened in the first place. The character of Sean is so poorly written that it’s quite unlikely that anyone would empathise with his plight. Frankly speaking, the protagonist Maggie is not a likeable character, either. Even by the end of the story, I couldn’t really fathom why she shouldn’t be blamed for what really happened to Elsepeth. The lesser said about the antagonist, the better! The climax is a big let down with a flat beaten to death twist taking away whatever excitement the reader has left in the story.

On the whole, ‘Day of the Accident’ is a pretty average read.

Posted by nikhimenon at May 30, 2021
Email ThisBlogThis!Share to TwitterShare to FacebookShare to Pinterest