The Perfect Wife by J.P Delaney 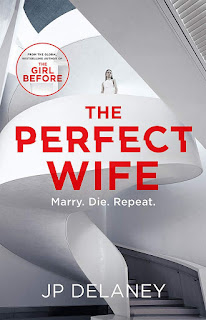 Anthony Capella's 'The Girl Before' was kind of an okayish read for me. So, I picked up this book with mixed expectations and after finishing the read, I am left with pretty much similar feelings.

Tim Scott, the brain behind Scott Robotics has just lost his beloved wife Abbie to an accident. The loving husband that he is, he cannot get over her memories and decides to create a robot (cobot) which looks just like her. The robot  has Artificial Intelligence and it can also think and behave like Abbie Scott. Dany is Tim's Autistic son and has his own share of issues. However, the cobot Abbie soon realises that something is just not right and Tim is hiding something from her. Will Abbie-the cobot be able to unravel the mysteries revolving around Tim Scott is what the plot is all about.

The book has got a pretty novel and interesting premise. The writing is quite fast paced and manages to hold the reader's attention. The book does touches upon issues like Artifical Intelligence, parenting and issues faced by Austic children (full marks for it).The premise is fresh and innovative. There are twists happening and regular intervals but the problem is as the plot unfolds, the twists become far and few in between. The constant shifts between the past and the present becomes irritating after a point and often confuses the reader. At 400+ pages, the book is quite overlong and becomes monotonous after a point.The climactic suspense was quite predictable.