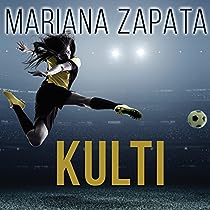 Genre : Sports Romance / Contemporary Romance
My rating: 4 of 5 stars
Unless it is a fantasy book, I have rarely picked books over 350 pages. Not YA / romance books atleast. I am more used to having my love story play out in the middle of the book and then work with other sub plots till the end. So, when I saw the length of Kulti on Storytel being 16hours long audio, my calculation put it somewhere around 550+ pages. And then I read the reviews highlighting how it was a slow burn romance. [ A slow burn story has a significant amount of development both for the individuals and for the pair throughout the novel, with romantic tension that builds up till the very end ] and let me tell you, it was worth spending all those hours with this story.

#Kulti it's been a long long time I read a 500+ page long romance novel and even after 70% done with the book we are just reaching the romance part. This was way too slow burn but so enjoyable.

Kulti is the story of Sal Casillas, a professional soccer player who had a big crush on the now-retired German player Reiner Kulti. Kulti, being the driving force for her to pick up this sport and work hard to reach the top position in her club and in this sport. The story begins when Kulti is announced as the new assistant coach for the Sal's team. Finding her crush and idol in such proximity is a dream come true for any person, and even if they start on wrong foot and almost declare war on each other, there is admiration for each other's skills. This admiration turns into friendship and leads to deeper feelings for both Sal & Kulti.
As mentioned earlier, it is a slow buildup to the romance, so all the events that help them know themselves and each other better are written so beautiful to create a natural progression of feelings. I loved it when Sal stood up for herself and her family without concern for consequences. And even if she did not like Kulti's actions, she helped him out of tough spots every time without expecting anything [ maybe just a thank you, which took its own sweet time to happen ]
"Every single thing that has ever happened in my life has led me here, Sal. Destiny is a ladder, a series of steps that takes you where you're supposed to go. I am the man that I am, and I have done the things that I've done, to get me to you."
The story gave enough focus on the sports, the team, the league, and all the ways the players sacrifice for reaching the heights that others take for granted. Even if I do not know much about soccer, I could connect easily to the story and I enjoyed the various things Sal & Kulti did outside the field - playing other sports, teaching kids, training, Sal's job etc.  I even enjoyed the scenes where they just sat on a couch nursing their injuries and watching tv. It was this kind of wholesome feeling that their friendship and this story has. A special mention to Sal's dad who is my next favorite character after the leads. He was amazing as a parent and totally adorable as Kulti's fan. I could totally relate to his reactions and actions around Kulti.
I loved reading Kulti so much that I have already picked another of Mariana Zapata books for next month.