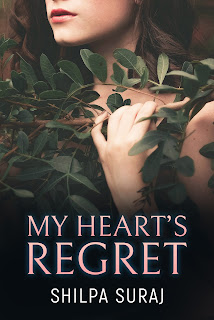 Samaira Reddy, the girl in the big house, the Bade Sahib's daughter, only wants one thing and one person...a life with her childhood sweetheart, her Rags.
Raghav Cherukuri has always been known as the driver's son. And has also always loved his Sam, the girl he can never have and never forget. And so, he leaves her and his life in Hyderabad behind.
But now, Raghav is back. A Chief Officer in the Merchant Navy, he is the success he’s always wanted to be. And yet, he has failed.
Samaira is meeting the ‘perfect groom’ her family approves of…A man whom Raghav can never be.
Can it finally be their time to be together? Or has their happy-ever-after passed them by?
This novella was previously part of the anthology Something Old Something New.
Book Links:
Goodreads * Amazon 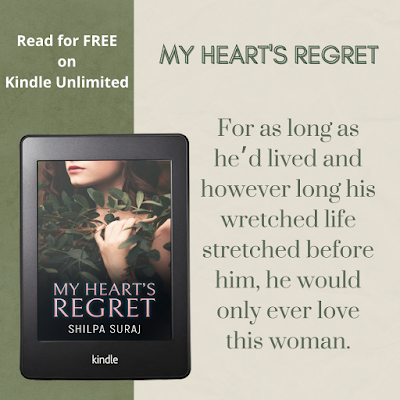 Read an Excerpt from My Heart's Regret:

“Why did you leave?” The question shot out of her taking them both by surprise. They stared at each other, a wealth of memories flooding the space between them. Years of hurt, months of pain and a million unspoken words crowded around them.
“Don’t.” He turned away from her, shaking his head. “Don’t do this.”
“Why not? You don’t think I deserve any kind of explanation?”
He opened the rear door of the car in response. “Are you ready to go home?”
“Home?” She laughed, a bitter sound that floated in the air. “Is that still home to you?”
“Are you ready to go back to your home?” The slight emphasis felt like a slap across her face.
“And that’s the truth of it, isn’t it?” She watched his face for a clue to his feelings. She found none. He was as stone-faced as ever.
“You don’t think of it as home anymore. When you left, you didn’t just leave to study and start your career. You left everything behind. Your home. Your past. Your…”
“Yes.” His acceptance cut her off mid-rant. “I left it all behind. The poverty. The insults. The humiliation. I left my life here behind.”
“Is that all you left behind?” The words sliced through the night like a knife.
Raghav just stared at her, his eyes a cauldron of bottomless emotion. On a growl of frustration, she slid down from the car and stomped towards the door he still held open. Yanking it from his hand, she slammed it shut. Then she walked around the front of the car to the passenger door and got in.
A storm was coming. A loud rumble of thunder could be heard and the wind was picking up outside the car. It blew a lock of his unruly hair into his eyes.
He didn’t notice but she did. Even through the tears stinging her eyes, she noticed everything about him.
Raghav continued to stand, motionless by the rear door, his tightly clenched fists the only evidence of the emotion raging inside him. The first drops of rain started to pelt down drenching him in seconds.
Finally, he moved towards where she was sitting. Leaning down, he rapped on the window to get her to put it down.
Samaira obliged, arching an eyebrow in challenge.
“Get out.” The words were gritted out through clenched teeth.
“No,” she snapped the word out.
“Go sit in the back seat.”
“No,” she said again as she settled more comfortably into the seat.
About the Author: 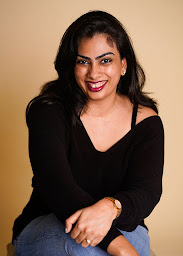 An avid reader with an overactive imagination, Shilpa has weaved stories in her head since she was a child. Her previous stints at Google, in an ad agency and as an entrepreneur provide colour to her present day stories, both fiction and non-fiction.
Contact the Author:
Website * Facebook * Twitter * Instagram * Newsletter
Posted by Pratibha at September 15, 2020
Email ThisBlogThis!Share to TwitterShare to FacebookShare to Pinterest
Labels: Release day Blitz, Shilpa Suraj