#BookReview : The Colossus of Roads by Christina Uss

Eleven-year-old Rick Rusek is determined to improve the traffic conditions in Los Angeles- his parent's failing delivery catering service, Smotch, depends on it.

"Traffic is a puzzle with one correct solution. And I've got to solve it!"


Rick has been studying maps and traffic patterns for years and devises solutions to improve Los Angeles' notoriously terrible traffic that he calls his Snarl Solutions. He has big ideas, but not enough resources-- until his artistic friend, Mila brings him to a Girl Scout meeting.

The scouts paint recycled traffic signs with their own designs. The signs will be hung all over Los Angeles to beautify the city with art. But Rick, The Colossus of Roads, has ulterior motives .. 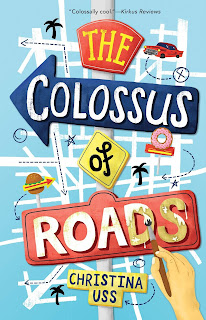 Review: Once in a  while it is so refreshing to look at the world from the eyes of children who not only have amazing ideas but also the conviction to act on them, no matter how tough the task looks.

Rick's passion to study traffic patterns, maps, and to plot solutions to make traffic system better for everyone is infectious and impressive. You feel as passionate about something that you never paid attention to before perhaps. And suddenly you look at this as a puzzle and want to figure out it along with Rick. It also made me appreciate the fact that different people have a different way to look at things and it does not have to do anything with one's age. Every person needs to be respected and heard for the good that they can bring to this world.

Though initially, it felt like Rick is too obsessed with improving the traffic that he does not look at others around him. But, he turns out to be a really good friend and a boy with a real golden heart. He is shy and troubled by a stomach that can not survive long car rides but it also acts as his voice of reason, motivation, and caution combined. It was too hilarious to read those conversations and to imagine Rick's plight every time he thought of a car ride.

the painting project by the Girls scout was interesting for me and appealed to me more because I like art & craft as a hobby at times. It was an important part of Rick's plan but it was also good to see him have fun in his own way there.

The book also showcases the whole community as an entity and how people come together in times of crisis even though their individual interests might have put them on opposite sides earlier. And such cute groups that too.

I so loved reading the Middle-Grade book and it was the perfect read to brighten my weekend. I would recommend it for both kids and adults alike.

About the author: Christina Uss has ridden her bicycle across the United States both lengthwise and widthwise, and has worked as an adventure tour guide in fifteen states, leading cyclists of all ages through various mountains’ majesty and all kinds of fruited plains. Even more than pedaling across state lines, Christina loves books, especially ones that remind us all that the world is wonderful, weird place. She lives in Western Massachusetts with her family and will always wave hello if she sees you out riding.
Posted by Pratibha at May 06, 2020
Email ThisBlogThis!Share to TwitterShare to FacebookShare to Pinterest
Labels: Christina Uss, Girl Scout, Middle Grade book, painting, society, Traffic signs