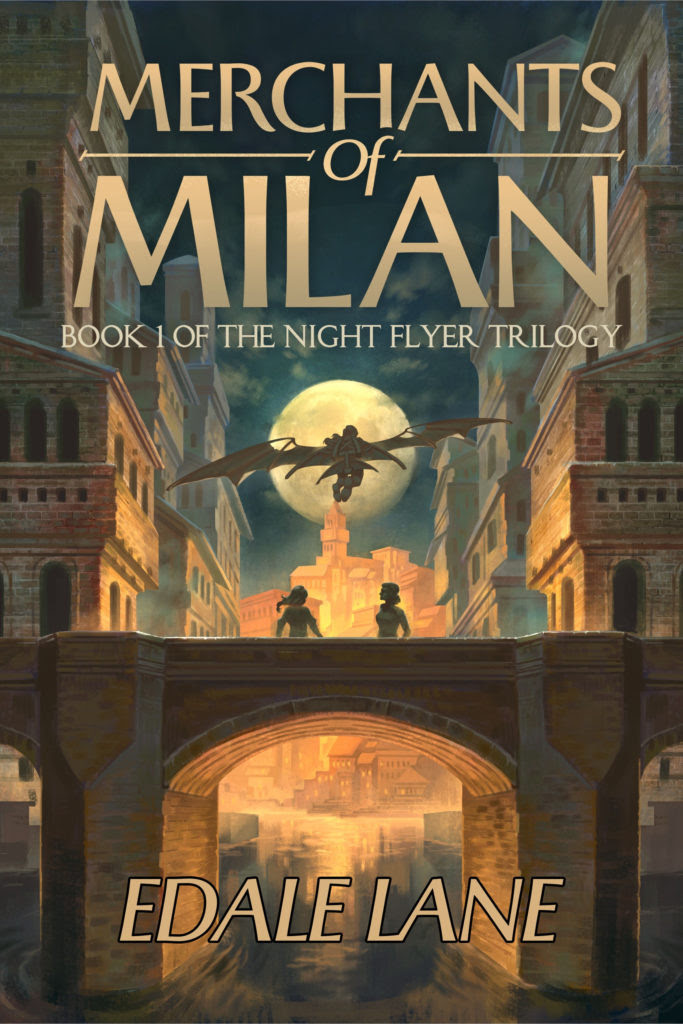 Florentina, set on revenge for her father’s murder, creates an alter-ego known as the Night Flyer. Madelena, whose husband was also murdered, hires Florentina as a tutor for her children and love blossoms between them. However, Florentina’s vendetta is fraught with danger, and surprising developments threaten both women’s lives.
Merchants of Milan is the first book in Edale Lane’s Night Flyer Trilogy, a tale of power, passion, and payback in Renaissance Italy. If you like gadgets and gismos, rich historical background, three-dimensional characters, and fast-paced action with a slow-boil lesbian romance, then you are sure to love this series.

Review: For a long time I was looking out for an f/f story with mature characters and the timing for Merchants of Milan could not have been better. Last year was my introduction to some really amazing historical fiction books and it made me realize the value in this genre. A story set in the city of Milan in 1600s, this book is another wonderfully crafted historical romance. It starts with the death of a scientist by the hands of an arrogant merchant, expecting his daughter would be in no position to avenge her father's death. Of course, she proves him wrong and how!

Some time back, I was reading about the life and various discoveries of Leonardo da Vinci and was amazed at the range and depth of his knowledge. Florentina, being his apprentice and a keen learner and observer uses many of Da Vinci's works as the base of her tools and tricks used by her alter ego, the Night Flyer. Her actions and the name give such a Batman vibe and I was glad that it lived up to the expectations in my head. Not just the historical setting, the drama within the family and other merchants were beautifully narrated, the action sequences were brilliant too. There was no one -dimensional or extra character that did not serve his/her purpose in the story. It was one of the factors I would remember this book for. I could visualize them so easily and I really wished I could see this story as a show someday.
The romance part though started very abruptly for me and felt forced in the beginning, it gradually became a part of the story and pushed the plot forward seamlessly. Both Florentine & Maddie are amazing women who are intelligent, kind, strong and most importantly have a great sense of duty and justice. It was heartening to read their interactions with each other and the kids alike.
I am very much looking forward to reading the next part of the book only to know about their story.
Kindle Version:  https://www.amazon.com/Merchants-Milan-Night-Flyer-Trilogy-ebook/dp/B083H6WNKD/

About the author:  Edale Lane is the author of an award-winning 2019 debut novel, Heart of Sherwood. She is the alter-ego of author Melodie Romeo, (Vlad a Novel, Terror in Time, and others) who founded Past and Prologue Press. Both identities are qualified to write historical fiction by virtue of an MA in History and 24 years spent as a teacher, along with skill and dedication in regard to research. She is a successful author who also currently drives a tractor-trailer across the United States. A native of Vicksburg, MS, Edale (or Melodie as the case may be) is also a musician who loves animals, gardening, and nature.


More posts on the book at below blogs: