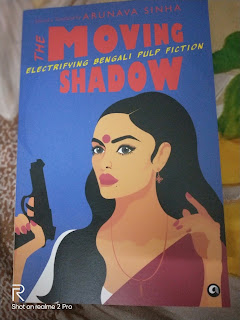 A few years back, Westland released a book titled : The Blaft Anthology of Tamil Pulp Fiction. If my memory is right, the book came out in two volumes and it apparently featured the English translations of  some of the most celebrated works of 70 s-80 s Tamil Pulp Fiction.I badly wanted to read those books then, but for some reason I have never been able to read them yet.

The Moving Shadow, is a similar attempt on Bengali Pulp Fiction by the award winning translator ,Arunava Sinha (incidentally the jacket cover of both books are also strikingly similar).
The book is basically divided into two parts. While the first half is a collection of four crime stories written by some of the biggest names of Bengali Pulp(Premendra Mitra,Swapan Kumar,Vikramaditya,Muhammed Zafar Iqbal) , the second half (Satyajit Ray,Adirsh Bardhan,Gobindolal Bandhyopadhyay,Bhabhani Mukhopadhyay) comprises of an equal number of carefully hand picked horror stories. Though some of the stories were first written almost 60-70 years back (evident from the descriptions and the dates mentioned in them), they never fail to engage and intrigue the average reader.
Of the four crime stories featured in the first part, I liked the first one the most (Parashar Sharma makes a bid).It tells the story of a multi-millionaire and his spoilt son. The suspense was good and the climax twist was also un-predictable. The second story, ‘Moving Shadow’ about the escapades of a mad scientist, though too far fetched was also entertaining (provided you don’t take it too seriously).The third one, ‘The Secret Agent’, incidentally the longest one in this collection is some sort of a spy-crime-thriller which badly needed some better editing. It’s not only over-long but also gets monotonous after a point. There are too many characters also in the story which confuse the reader after a point.However the loose ends get tied neatly towards the end and the twist is also neatly done. Copotronic Love is about a robot which is madly in love with a woman. An illogical,yet interesting short story, this one is.
Among the four horror stories ('Bhuto','The Moon is Back','Saradindu and this body','Foreshadowed' featured in this book, my pick is 'Saradindu and this body',about a doctor with mental illness penned by Gobindolal Bandyopadhyay.The story has got a killer twist which manages to send a chill down your spine.
Arunava Sinha deserves accolades for his wise selection of stories as well as for the translation which is quite neatly done. The language is pretty easy-to-read and the editing is also crisp.