The Word is Murder by Anthony Horowitz 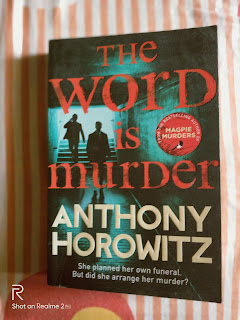 Anthony Horowitz , one of the most sought after authors of children's fiction is also someone who has made a smooth transition to writing adult's fiction. His Sherlock Holmes novels, 'The House Of Silk' and 'Moriarty' were not only highly successful but also critically acclaimed.'The Word Is Murder' is a stand alone crime novel and interestingly has the author himself playing a prominent character in it.
Detective Hawthorne is the protagonist. He was working with the Police once upon a time ,but is now working as a private detective. Diana Cowper, a wealthy lady and mother of the popular actor, Daniel Cowper is found strangled in her apartment. But the strange thing is that she had planned her own funeral less than 24 hours back. But is there more to the murder than what meets the eye? Detective Hawthorne investigates with the writer Anthony giving him company.(Anthony has been assigned to write about the investigation.
The book has got some smart lines and interesting refernces to real life persons and movies.The meta-references are also quite brilliantly done.The scene featuring Stephen Spielberg and Peter Jackson and the author himself is a scream. Though it's unclear whether it was an entirely fictional scene, I hope Anthony Horowitz gets assigned to write the next film of the Tintin franchise. Though the book is a tad too long at 390+ pages, there are enough twists and turns happening at regular intervals making the proceedings interesting.
On the whole, I'm giving it a 3.5 out of 5.
-nikhimenon