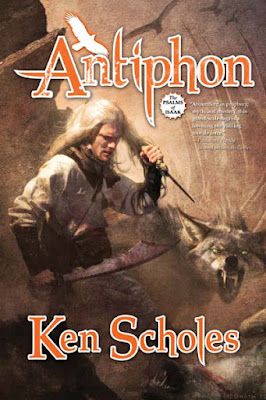 Antiphon
Book 3 of "Psalms of Isaak'


SYNOPSIS - Nothing is as it seems to be.

The ancient past is not dead. The hand of the Wizard Kings still reaches out to challenge the Androfrancine Order, to control the magick and technology that they sought to understand and claim for their own.

Nebios, the boy who watched the destruction of the city of Windwir, now runs the vast deserts of the world, far from his beloved Marsh Queen. He is being hunted by strange women warriors, while his dreams are invaded by warnings from his dead father.

Jin Li Tam, queen of the Ninefold Forest, guards her son as best she can against both murderous threats, and the usurper queen and her evangelists. They bring a message: Jakob is the child of promise of their Gospel, and the Crimson Empress is on her way.

And in hidden places, the remnants of the Androfrancine order formulate their response to the song pouring out of a silver crescent that was found in the wastes.

“Watch for the ones who leave your mouth hanging open. Study them, find out what they love and what they fear. Dig the treasure out of their soul and hold it to the light. Then Be like them.”

“Her laughter was an upbeat song set to a minor key.”


FL Speak - It took me a while to get into this.


I read the second book 5 years ago. Book 3 was a blur. It was hard to connect and make sense of especially when reviews of this epic series are so less. Why internet, why? After a lot of searching and I really mean a lot, I went back to this and for the third time, Ken Scholes blew me away.

Book 1 and Book 2 were fun. This was a revelation of sorts. The bigger picture is still unknown but what was once myths and legends slowly turned into practicality and logic. The use of magiks and technology is a deadly combo especially when you have a nomadic army, invisible scouts, metal men, blood sacrifices and treasure troves of legends in the deserts.

The desolation of Windwir began the series. By book 3, we are getting to know why exactly someone annihilated an entire city and a race of people. Meanwhile, the canticle is still singing. or ringing is it? Music people can hear. The music they hear in dreams. Music metal servitors hear. I must be mad but I stopped wondering what that it could be. I just know it sings and it requires an answer.

Halfway down book 3, I've fairly grasped the on-goings of the book. The Named Lands are in danger. Grave, grave danger. Neb, the boy who witnessed the fall of Windwir finds himself in the Churning Wastes, a vast desert hunted by strange women under abnormal magiks. Isaak is in the Named Lands, dreaming about a song. It's a compelling book, making you fall in love with the characters over and over again. We see a hint of a bigger plot with more and more impossibilities coming to a fruition. The Watcher and the Crimson Princess? Who are they and what do they have to with a race of people that came out of nowhere.

The Named Lands face a threat never envisioned before. And within the Named Lands, there is treachery in plenty. Rudolfo and Jin Li Tam face the threat for their baby while the world slowly moves towards its impending destruction.