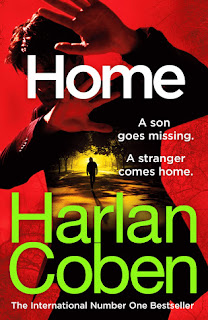 Home is the latest title in Coben's Myron Bolitar series and re-unites Myron,Win,Big Cyndi,Esperanza once again for a brand new adventure.Also Joining them in the adventure are Mickey,Ema and Spoon.

Two boys go missing and twelve years later,Win and Myron stumbles upon one of them in London and manage to bring him home ,but not everyone is convinced that he is the real person.This is the basic premise of 'Home'.Myron and Win ,in their trademark style try to solve this mystery but I must confess that 'Home' is one of the weakest works to have come out in Bolitar series.The book is not at all racy and nothing much really happens in the first two hundred +pages of this tale.The twists are far and few in between and not of them are indeed convincing.Too much time is spent in unnecessary detailing and by the time the actual mystery is revealed, the reader loses interest in the whole proceedings.The good thing about the climax is that though the twist is predictable,it manages to move you emotionally (the tail-end twist including Brooke and 'the gun' could have been avoided though).The epilogue reveals a positive event in Bolitar's personal life and I am definitely looking forward to the next one in the series.