In the second part of the conversation,James Barr reveals his softer side and his experiences in the Indian sub continent. 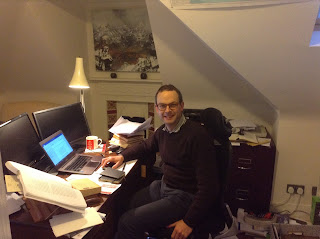 Q:Have you ever got frustrated for having chosen to be a professional writer?
(smiles)yes,you have days when you are researching and you find nothing and there are also times when you are trying to write and get nowhere. But it’s true for every other author as writing is not at all an ‘easy job’. But if you ask me would you be doing anything else,I would say No!

Q:How do you deal with criticism and have you ever been accused of distorting history for selling a couple of more copies?


It depends on what kind of criticism it is. For my last book, some people thought it was hard to follow while some others were of the opinion that it did distort events.At the end of the day,it’s about your conviction in what you have done.As far as You are confident that you have done a pretty honest and balanced version of events without taking sides, you can deal with the criticism in a mature way.

Q:So far,You have written mostly about the Middle-East.Do you plan to do something else with your future works?
Yes,definitely! I am also interested in the relationship between ‘allied countries’ and the ‘tensions’ between them.

Q:Have you ever been to India?
I was invited to the Jaipur Literature Festival last year and I was astonished by the sheer number of people who turned up to hear Shashi Tharoor speak in the festival.You will never see something like that in England.India is an amazing Country.

Q:About Piracy?
Piracy in U.K is mostly about the digital copies that get illegally uploaded.But I think ‘hard copy’ piracy is not much of a problem in the U.K.

Q:How easy it is to be a full time-writer in the U.K.?
It’s not at all easy.Very few writers earn decent amount of money by writing full-time.In that sense,I have been fortunate enough.

((Nikhimenon is an Infectious Disease doctor by profession and a freelance book blogger by passion.He has been trained in India and in the U.K.The first part of this conversation can be read here.)