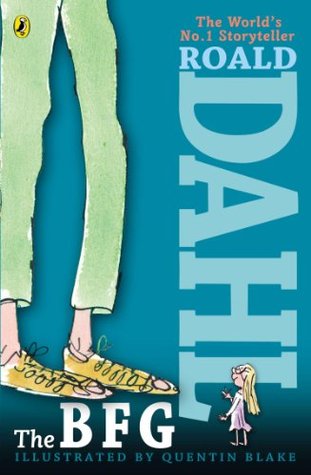 When I read books that have been adapted into movies, inadvertently, I check to see if the movie is as good as the book. In the case of this one, the BFG by Roald Dahl, I felt the book held more promise than the movie (which is the case more often than not anyway).
The BFG (Big Friendly Giant) is a story about an orphan named Sophie who sees a giant during the witching hour. This leads the giant to capture her and take her to Giant Country, far away from the eyes of other human beings. This giant (BFG) lives in a cave, is the only friendly giant (who doesn't eat humans), is shorter than the other giants and thus oppressed by them. He also blows dreams into the ears of children. The book, you could say, is Sophie's adventure with the BFG, and how the two of them manage to tame the other giants and such.
I don't know about the movie, but I had fun reading the book. The funny language of the BFG (though one does need time to get used to it), his manner of talking or his giant ears, how friendly he is with Sophie... all that felt right for a children's book. It was also nice to read about some of the dreams. A couple of them felt familiar, so innocent, yet that's what we would have dreamt when we were children. I don't know how much I like the character of Sophie, or the other characters either. Some quotes in the book felt true, whereas others felt unnecessary to add to the humor that was already there.
Would I read it again? Maybe not. I would read other books from Dahl to see if they are better, or indeed, if this one felt great because it was the first time I read a Dahl book.
Reviewed by Vinay Leo R. No payment was taken for this review; these are the unbiased and uninfluenced thoughts of the reviewer about the book.
Posted by Vinay Leo R. at February 27, 2017
Email ThisBlogThis!Share to TwitterShare to FacebookShare to Pinterest
Labels: book review, Leo, Roald Dahl