In a world where ash falls from the sky, and mist dominates the night, an evil cloaks the land and stifles all life. The future of the empire rests on the shoulders of a troublemaker and his young apprentice. Together, can they fill the world with color once more?

In Brandon Sanderson's intriguing tale of love, loss, despair and hope, a new kind of magic enters the stage — Allomancy, a magic of the metals. 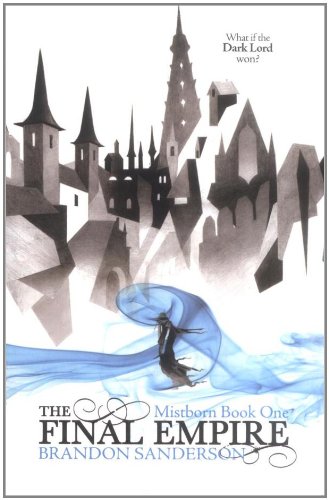 I do not know when I left reading international fantasy fiction. This book was the Book of month  for December on the FB Broke bibliophile page and I think it was enough for me to make another dive into fantasy fiction. This is my first Brandon Sanderson book and if the genral opinion has to be trusted , it is not his best. I mean really ?? Çause for me , this was such a great read to end the year with.

The empire , the characters and the rules that govern the society were set up very elaborate and with a good logic to back it up. Once you understand it , you would feel like a part of it. Let me first talk about Vin , the central character who is not a born heroine , but rather comes to take her rightful place and direction in life after she is found by the troublemaker , the survivor of Hathsin ,  Kelsier. Kelsier has done some pretty unbelievable things already and yet , he thinks of the impossible this time - to overthrow the Lord Ruler.

Oh boy , Lord ruler is one of the few negative characters whom I loved. I would have so much liked to know more of him and yet the way he is shown in the book , it is awe-worthy.  he is ruthless , calm , patient and yet there is an air of indifference to him. One of my favorite scene is when he meets Kelsier in the end. And before I forget , i loved Elend more than Vin . He is the usual misfit sort of person who has a lot of ideas on how to run things. He is kind of man I would fall in love with easily and I did. There is charm and certain innocence to him that keeps you rooting for him even in the second book.

Kelsier, Vin and the crew together make for a fun filled adventure. There are elaborate tales , enchanting parties, lovable casts and courage that shines in every page. Fantasy fiction was what hooked me to books whenever my interest faltered. This book was a Savior. My reading slump of one month got cured with this. And how awesome !!

“But you can't kill me, Lord Tyrant. I represent that one thing you've never been able to kill, no matter how hard you try. I am hope.”

“I think given the choice between loving Mare - betrayal included - and never knowing her, I'd chose love. I risked, and I lost, but the risk was still worth it.”