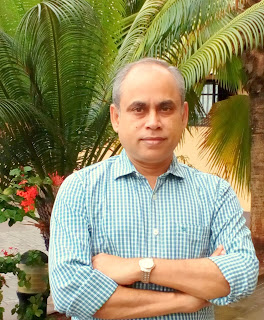 Last week I read and reviewed Surpanakha by Hariharan Iyer. A brilliant book on politics, revenge , money games and strength of common people standing up for people we love. This week,we bring you a conversation with the author -


Which one character did you think of first in the book?
Zarina. You know why? There are a couple of things, which inspired me to write Surpanakha. One of them involved Zarina.
What was the inspiration behind the story?
A couple of years ago, a law intern alleged that a retired judged behaved in a sexually inappropriate manner with her. Celebrity lawyers took up her case. Media hounded the judge. He was forced to resign from a strategic post retirement job. Thereafter when the police registered a case and wanted the victim to testify, she vanished. We don’t know what happened. Was there pressure on her not to testify? Or was it decided that the purpose had been achieved? Neither the celebrity lawyers nor media felt obliged to explain their position to the masses.
Secondly, a series of articles by an IIM professor on the mushrooming NGOs and their questionable sources of funds forced me to think. Around the same time there were reports that well-known personalities who were running foreign funded NGOs were using the funds for buying branded jewelry, clothing and shoes! It made me wonder what the underlying motivation could be for floating such NGOs.
Both the above gave rise to a lot of what ifs in me and pushed me into the realm of fiction. And the novel was born. I would, however, like to clarify that it is not a real life story. Now you can understand why I thought of Zarina first.
Which character's personality/ manners resembles a real life person you know?
Mythili. And who is Mythili? A housewife who displayed extraordinary courage while dealing with a grave challenge to her husband’s career. I know of a couple of women who have shown this kind of courage.
What was the hardest thing for you to do while working on this book?
My first draft was 105,000 words. I gave the manuscript to a couple of beta readers and their near unanimous response was ‘The book is interesting, but cut down the size.’ And that was an unenviable job. Every word I had written appeared to be significant. Every word I deleted cried for its continuance. And indecisive period of 10 days. Finally I cut down around 15,000 words!
What are you working on next?
My next book. It deals with an aspiring young girl who wants to pursue medicine, but the reservation laws of the country would not allow her to do so. What does she do—curse her fate and choose another discipline to pursue like her elder brother did a few years earlier or fight back?
What was your first step into writing and how far have you come from there?
I took to writing a couple of years ago. I blogged on media and current affairs for a year at valadyviews.blogspot.com and contributed articles to The Hoot, an online media watch portal before hitting on the idea for this novel.
Who is your favorite author in the Indian fiction scene at the moment?
S.L. Bhyrappa. He is a Kannada writer. Many of his novels have been translated into other languages. I like his Aavarana the most.