The Hanging by Lotte and Soren Hammer 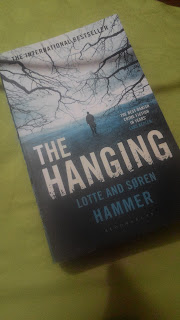 The book begins from the day of the deed - 5 people hanged naked in a school gym in most horrific state. Detective chief Kinard Simonsen is called back from his vacation and given all funds and jurisdiction to investigate this. The things are complicated with rumors in the public about the hanged men and soon there is a systematic built up of rage and punishment in the country. When even your own team doubts the right and wrong, it takes a lot of patience and help from every corner to do justice.

The book, as much its well written and held all through till the last page, is a little confusing in the beginning. The team and the people being investigated are all a little difficult to tell apart in the initial scenes. Once you get a picture of that , its a smoith ride from there. There are some very brilliant scenes written in the book - flashes of human behaviour and vulnerability etched in them. The conversations are light and the bonds within the team make you like Simonsen a little more than the rest.
For me the major takeaway from the book was how some times public opinion is influenced by some powerful people - some with money and some with brains. It can be good when it makes people sit up and take notice of the situation but to make a huge spectacle of that doesn't let it stay just. The whole society is as right as wrong when it turns a blind eye on some crimes. This book talks about both the sides letting you decide Wether it was all worth in the end.

My rating : 4/5
Posted by Pratibha at July 22, 2015
Email ThisBlogThis!Share to TwitterShare to FacebookShare to Pinterest
Labels: Lotte soren hammer