Prince of Thorns by Mark Lawrence. 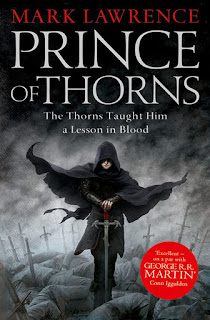 
Before the thorns taught me their sharp lessons and bled weakness from me I had but one brother, and I loved him well. But those days are gone and what is left of them lies in my mother’s tomb. Now I have many brothers, quick with knife and sword, and as evil as you please. We ride this broken empire and loot its corpse. They say these are violent times, the end of days when the dead roam and monsters haunt the night. All that’s true enough, but there’s something worse out there, in the dark. Much worse.


From being a privileged royal child, raised by a loving mother, Jorg Ancrath has become the Prince of Thorns, a charming, immoral boy leading a grim band of outlaws in a series of raids and atrocities. The world is in chaos: violence is rife, nightmares everywhere. Jorg has the ability to master the living and the dead, but there is still one thing that puts a chill in him. Returning to his father’s castle Jorg must confront horrors from his childhood and carve himself a future with all hands turned against him. Mark Lawrence’s debut novel tells a tale of blood and treachery, magic and brotherhood and paints a compelling and brutal, and sometimes beautiful, picture of an exceptional boy on his journey toward manhood and the throne.

Words of AT.
This book is amazingly powerful and quite different. Have you ever come across a HERO of a book who rides with a gang of 40 members killing whom he wishes and raping whom he likes? No? Then, let me introduce  you  to Honorous Jorg Ancrath!
He was soft and gentle like you and me, but situations made him a villain. Watching his brother and mother killed brutally, Jorg hangs on thorns bleeding his life. Even though he is removed from thorns, the scars and lessons stay with him. a young boy of nearly 13 burns kills a village, burns a kingdom, drives road brothers and he becomes a King.
The book is quite fast. No meat nor fat just the muscle and skeleton. Although it is fast, it is quite amazing. some of you may not like it because of the scenes, episodes, Jorg's Attitude, but it surely is a worthy read. the character development is amazing. The story is split into present day events and past, i.e. four years earlier, here you can see the old Jorg and New Jorg. It is really a promising start to a trilogy. Completely loved it!