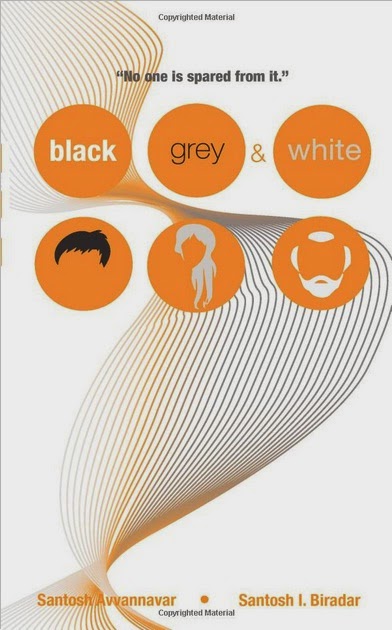 'Black,Grey and White' is a compilation of five short stories which deal with the world's most dreaded disease-HIV/AIDS. HIV is one disease,inspite of all the government funded campaigns and programmes continues to be the least understood malady by the general public.It's high time that the common man sat up and took notice of this dreaded disease and it's implications in the society.Even now,many people don't know about the different modes of spread of this dangerous disease.Through initiatives/works like 'Black,Grey,White',I hope the many myths about this disease are broken for good!
First things first,the authors deserve a pat on their back for choosing a taboo disease like HIV/AIDS as the principal theme for their anthology.These stories not only help in spreading awareness about AIDS among the lay man but also helps in inspiring/sensitizing them to unite and fight for the rights of the HIV infected people.Right from the title and it's tag line('no one is spared from it'),there is a conscious effort from the author's part to stay true to the basic theme as far as possible.The first story,'Shahid',written like a drama/social-skit is packed with a number of meaningful dialogues and inspiring situations.As in the case of his previous work,every story of this book also ends with a tail note which is addressed to the 'dear diary'(the first one talks about myths).The second story is about Chintu,an HIV positive boy and how the society deals with him.Though the tale is only a couple of pages lond,this undoubtedly is my pick of the lot.The societal attitude towards AIDS patients and their hypocrisy  is clearly etched out in this story(the customer not buying ice cream from him after getting to know that he is HIV positive).The third story,'Game of Lust' is a bit contrived,but succeeds in driving home the point.The 'Highway Sex' and 'Abram and his Prodigal Son' are passable.
Coming to the positives,the authors have tried their best to be as genuine and honest as possible.They have tried to keep the prose simple and straight forward.There are a couple of heart touching dialogues which are quite effective in conveying the message which it intends to.The book is quite short and can be finished in one sitting.As a social awareness piece,'black,grey and white' gets a five out of five.The cover page is quite competently designed.It's quite evident that a lot of thought has gone into it's making.
On the downside,as a literary work,this book does miss the mark.Agreed,there are some great ideas and some fine sentences,but is it enough to qualify as good fiction?The book also suffers from numerous typos and grammatical errors.The narrative too is often inconsistent and even boring at times.
On the whole,despite it's flaws,'Black,Grey and White' is one work which needs to be appreciated for the good intentions behind it.It's definitely a one time read!
-nikhimenon

Posted by nikhimenon at May 17, 2015
Email ThisBlogThis!Share to TwitterShare to FacebookShare to Pinterest
Labels: nikhimenon, Santhosh Awannavar, Short Stories