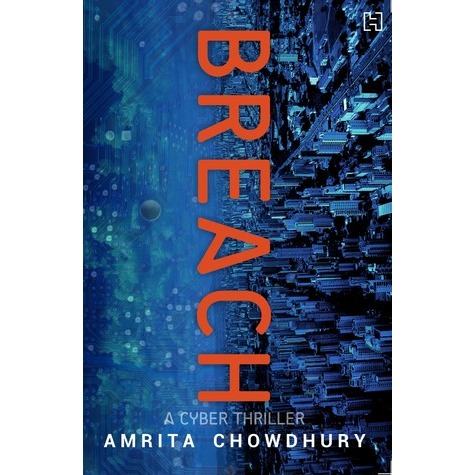 Breach is not just a cyber thriller but more like a beginner's guide to all good and bad of cyber world crime and Amrita has done a brilliant job with this book. A simple word "Breach" and multiple areas of doing that online - more than we can imagine and many of which Amrita has touched in the book.

The story starts within the pharma company Acel which is on the verge of filing the patent for a breakthrough drug Colare for fighting cancer. And not just that , Acel has taken the risky decision to split the tests and the data collection between US and its new division in India headed by Vir , whose love and career are both put at stake following this decision. Just when everything is supposed to go right , trouble begins with data from Indian end and it soon threatens everything Vir worked for , not to mention billions of dollars , reputation and credibility of Acel. Some one out there is corrupting the data that is so critical to prove the success of the drug and also wreaking havoc in the whole data storage.

The book , soon moves to multiple cities and characters , which bothered me a little bit in the beginning. All through the book , whenever a character is introduced , it is a good practice to give some background and character sketch which is properly done here. But the same also tends to overwhelm a bit. I feel the author should have done away with few characters, not bothering to give them a face and name.

Nevertheless , the book keeps you engaged while taking through all the processes followed for data collection , security and privacy while it is shared within closed teams. Meanwhile it effectively shows how it is not just the MNC or the government who are targeted but also the normal people get involved unknowingly. The Acel Indian team appears like mini heroes as they give up sleep and food to find the person responsible for their troubles.

I liked some of the subtle shady areas Amrita has uncovered and presented for layman person in order to make each of us more aware of what is happening around us. The book rushes through all of this in a good pace till the end where it lets down a bit. The motives of the one person who is responsible for all the mayhem are mere speculations and though I was convinced, I would have liked if there was some elaboration still.

All in all , it is a well written and well researched book that will surely entertain every thriller lover.