The One Who Stood Against Shiva, and other stories — Siddhesh Kabe 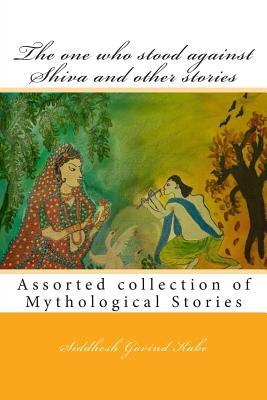 Mythology is a genre I’m very fond of. I’ve told it many times before, that I’ve grown up devouring tales from Indian mythology, so it holds a special place in my heart. So when a book comes asking questions like “What did Bhisma had to say about Krishna before the Mahabharata war?”, “Why did Shiva get defeated by hands of a child?” and “Do you know what the snake mother had to teach before the Gods were born?”, it definitely intrigues me, because I know the answer partly, if not completely.
“The One Who Stood Against Shiva, and other stories” brings six stories into focus. The first of the six deals with Bhishma and his words before the war. The story would make those familiar with the Mahabharata turn their heads. The second story deals with the Ramayana and corruption in the kingdom of Lanka, and the wisdom of Vibhishana. The third story is “The Story of the Goose” which was one I didn’t know. I won’t tell what it is about, in case you don’t know it either. The fourth story brings the birth of Lord Ganesha into focus. That’s one I knew and loved reading. The fifth story is the story of Kadru and Vinata. This again turned out in a way contrary to what I have read before. The last story is another that I didn’t know of, and as such, won’t discuss here.
What I love in this small book is the mythology. Tales that are familiar, yet have a bit of mystery to it. What I wish was that there was more to these tales. It starts to build up the fun for that mythology lover in me, and then it just ends. It needs more magic, more substance. It left me with a feeling of “there, yet not there yet”.

Book Title: The One Who Stood Against Shiva, and other stories
Author: Siddhesh Kabe
Genre: Mythology
ASIN: B00HLPNCAM
Price: INR 51