Chronicles of Urban Nomads, An Anthology of Short Stories 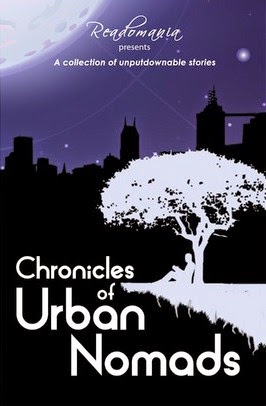 Short story anthologies make for good reading because you can read one story at a time and each story has its own theme. You don’t necessarily have to look for continuity from story to story either. The Chronicles of Urban Nomads by Readomania brings nineteen such short stories that try to wow you, the reader with their variety.
The anthology has two parts: Imagine and Musing
Favorites:
From the “Imagine” section, my favorite stories were “The Wait” and “A Little Nugget of Fear”. I liked the former for it made us feel the anxiety and the wait along with the character. I’d have loved it more had it been from the perspective of the other character. I wouldn’t say the ending was unpredictable and left me wowed, but the story worked for me. The latter story is one I loved for the perspective. The author chooses to take us on the journey from the point of view of something which is inside most of us, but in particular inside a young woman. I’d have liked it if it ended some other way, because it felt too common.
From the “Musing” section, my favorite stories were “Bachelor and Baby”, “The Last Letter” and “Rendezvous”. Each of these stories had a simple narration style, which I like. It makes for easy reading. The first one wowed me with its storyline and character which left an impact; the second one with its ability to make me emotional; and the last one for its narration and sweetness, though it wasn’t unpredictable as such. They didn’t evoke any strong images as the first part of the book but then again, they weren’t meant to.
General thoughts:
Firstly, I’d like to mention the cover design, which I liked a lot. The stories were interesting and memorable, which is why am not pointing out stories which didn’t stand out as much as the five above did for me. Some stories that made me want to know more. Like for e.g. “The Blue Slippers” while talking of a unique friendship from the view of a camera (it’s not difficult to know this immediately at the start, so this doesn’t qualify as a spoiler), left me wondering who held the camera that captured this friendship, how come they were looking at the two friends so much. “Confessions of a Benarasi Sari” made me wonder if liking a saree picked by someone is really that important for a marriage to survive.
A better way to generate more interest in these stories would have been to mix them up randomly. The sections, while helpful to divide them by a factor, killed the curiosity. After the third story, I started to try and guess the point of view from which the story was narrated. Overall, it is an enjoyable collection, which could have been so much better.


Reviewed for the publisher, in exchange for a review copy. The views expressed here are my own, frank and uninfluenced.