The One You Cannot Have, by Preeti Shenoy 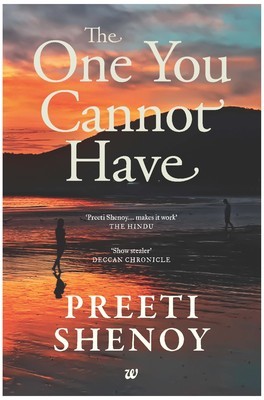 Some authors leave a mark on your reading. Though the stories aren’t absolutely amazing, they still have those drops of brilliance that linger after the read; something that makes you eager to pick up the next novel of that author and read it. One such author, in my opinion, is Preeti Shenoy.

The One You Cannot have is a love story. The story mainly follows Aman, Anjali, Shruti and Rishabh. There are other characters too, each with their own importance but I feel it is these four who make the tale. Like the title says, it’s a story about the one person each cannot have. And the storyline I feel does that justice. Aman and Shruti were once inseparable, but when the latter left suddenly, the former, to recover, goes abroad. So what will happen when Aman returns to India years after? There are two girls in his life… Anjali, who is in love with him, and Shruti, who he has a hard time letting go of, even though she is already married. Throw in characters like the flirting friend Mark, and the husband Rishabh, and you know you’re in for a quick, yet enjoyable read.
What makes this book worth reading? It’s the characters. To me, they feel real. The way they react seems real, like hiding an old suitcase or jumping at the chance of finding love again. Or even the way they accept certain things. The book also has some subtle humor. The narration is simple, yet has the pace to keep the reader hooked. The alternating character narration helps to get into the skin of the character too.
What doesn’t work? The ending is predictable. I suppose the genre is one that doesn’t necessitate unpredictability, but still, I’d have liked a little suspense. Another thing I didn’t like was that once the story of the main characters is completed, the book ends with an epilogue. Some things end suddenly with that epilogue, and some aren’t ended at all. In a series, that’s kind of acceptable, but not in a standalone book.
The book is one that will take hardly a few hours to finish, and it is a one-time read. But like I said earlier, it was an enjoyable read. And would pick up her next book when it releases as well.