The Deliberate Sinner by Bhavna Arora 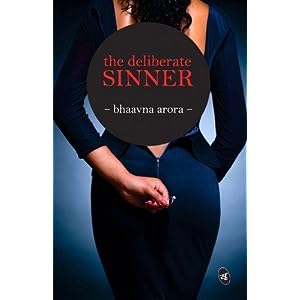 I will be lying if I say that I hate reading chick-lit s.Infact, I love well written,hilarious works belonging to the afore said genre.I feel they are the ideal choice for a light read.Had just finished quite a  heavy book and naturally, I thought it would be foolish of me to waste  the opportunity to review this new (supposedly chick-lit) book listed in the blogadda book review program.So,I am here reviewing the debut work of Bhavana Arora, 'The Deliberate Sinner'.

Plot-First things first.The book offers what you expects out of it.There are lots of passionate love making scenes and a heavy dose of infidelity with the sex scenes quite decently written.The plot is something like this-Rihana fell for Veer not knowing how insensitive and self centered he actually was.Only after becoming her wife,she got to know the 'real' Veer.The poor thing wants to get out of her 'failed' marriage but is unable to do so,thanks to the 'familial pressures' and 'goodwill' of her parents.Unable to cope up with the familial pressures and the accompanying mental and emotional trauma of a bad relationship,Rihana takes a drastic step in life.'TDS' is more or less a life sketch of Rihana and her attempts to stay relevant in this society which is largely male dominated.

Characters:The protagonist is Rihana,a rich,modern,independent woman with 'progressive thoughts'.Her husband is Veer,an ambitious,dominating,and sexually hyperactive person who is a bit too self-centred.Then,there is Raj ,Rihana's friend and 'true love'.Though the characters aren't too many,the basic problem is that none of them have been developed well.I found it difficult to empathize with Rihana who comes across as  too 'confused' and impulsive.Many of her actions appeared irrational and I still don't know what made her stick to Veer for such a long time.The same is the case with the two men in the story,Veer and Raj (though Veer gets a slightly better treatment,I don't know why 'Raj' has been treated so shabbily by the author).Somewhere towards the middle of the book,Raj disappears only to appear later for a brief period and that too in the most cliched of the situations.

The Writing-One of the good things about Bhavana's writing is it's rawness.It is lacking the faintest hint of literary pretension which is a good thing,considering the target audience of this book.Since the language and  writing have been been kept deliberately simple,the reader is never over burdened with heavy duty lines and 'philosophical' insights.

The good things about 'TDS'- The attention grabbing cover.One of the prime reasons for me showing an interest in reviewing this work was it's 'attractive' cover! The book has it's heart in the right place and the issues which it discusses (hypocrisy,gender bias,marital rape;to name a few) are quite relevant in the present times.There are a couple of thought provoking,intelligent lines are placed well in the narrative.'TDS' is not a very 'heavy' or over-long book.At just about 168 pages,Bhavana wraps up the story without stretching it too much.

The not-so-good things-The plot itself is quite cliched (it's actually,'Balaji Telefilms' material).C'mmon,haven't we seen(and read) all these things before?The underdeveloped characters and un-intentionally funny behaviour of their's (in more than a couple of situations) is not helping the book in any way.If you aren't very comfortable reading graphic sex scenes,then this one is definitely not your cup of tea!


Verdict-The Deliberate Sinner is an okay read.I'm giving it a 2.5/5

This review is a part of the biggest Book Review Program for Indian Bloggers. Participate now to get free books!