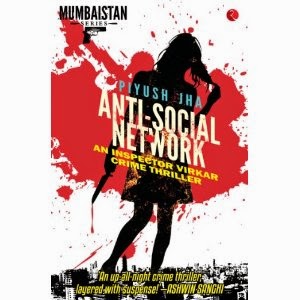 'Anti-Social Network' is the third book in Piyush Jha's 'Mumbaistaan' series featuring the maverik cop,'Inspector Virkar'.Set in Mumbai,the book is an edge- of the-seat thriller (well,almost!) with ample doses of twists and turns happening at regular intervals.

Plot and Characters: In the opening scene itself,we are introduced to the protagonist,the no nonsense Inspector Virkar.He is seen chasing an informer-turned- extortionist Usman Teacher which inturn sets the tone of the book.Though the cop is unsuccesful in nabbing the criminal,his possible suspension is averted thanks to the gruesome serial killings which is rocking the city of Mumbai.The victims are twenty something students from the suburbs of Mumbai who don't seem to be related to each other in anyway.Joining Virkar in the investigation is the petite psychologist,Naina for whom the Cop develops a liking quite (un)expectedly.As the mystery unfolds,the computer challenged policeman realizes that things cannot be the same ever again.Apart from Usman,Virkar and Naina the book has another important character in Richard,a Computer geek and an expert hacker.There are atleast a dozen suspects/peripheral characters acting as the crucial links between Virkar and the principal antagonist(s).

Language and Writing:Blame it on the author's background,the writing is too filmi at times with scant regard for grammar and language.The English is pretty basic and there are quite a number of grammatical errors and typos in this edition('navel' becomes 'naval').But the book is definitely a fast read.At 192 pages, 'ASN' is crisply edited and competently executed.It quite often reads like the screenplay of the next big Bollywood pot-boiler.It is infact this fast paced narrative which covers up for the gaping plot holes and the illogical sequences in the story.Though the graphic descriptions of murders may repulse a few readers,those of you who are big fans of those western crime thrillers will probably find the violence in ''ASN' to be of the kindergarten variety.

Cover Design,Formatting and Overall design:The book cover is quite well designed eventhough it looks quite similar to the author's previous work,'The Compass Box Killer'.The formatting and overall design are also quite apt for a book of this genre.The Book is quite handy with about 44 chapters,each one of them only a couple of pages long.

What I liked the most about the book

1.The scenes between Virkar and Naina
2.The pacing and innovative premise of the book

What I didn’t like-
1.The plot is too generic and the characters aren't well etched out-We have the serial killer who knocks off seemingly random people in the most brutal ways.Though the book starts off by describing the killer and his/her acts in detail,by the time the story reaches half time(yeah,the review is als becoming very filmi) he/she loses importance.On the other hand,even though he is there in every chapter,the reader gets to know very little about the book's protagonist Virkar.Agreed,he is a very intelligent,beer loving cop.But then how is he as an individual?his family?his traits?(I haven't read the first two books,may be I should read them to know more about the hero!)
2.The final revelation/twist was sort of predictable.C'mmon,we have seen similar similar ones so many times in movies!
Verdict:Though built on a wafer thin plot,'ASN' manages to entertain the non-discerning reader to a very large extend.Full credits to the author for achieving that.But even having said so,I must admit that had a little more thought gone into this work,it would have easily become one of the finest desi crime thrillers of all time.I'm giving a three out of five for this latest thriller from Piyush Jha.


The book was received as part of Reviewers Programme on The Tales Pensieve.

If you've enjoyed the review, you can buy the book from the following sources below.