A Newlywed's Adventures in Married Land by Shweta Ganesh Kumar 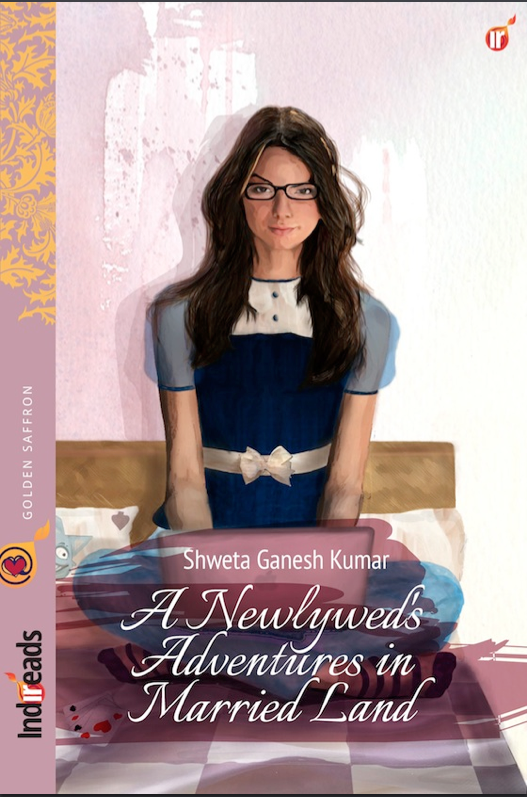 "Former workaholic Mythili moves to the Philippines to be with her new husband Siddharth. Once there, however, she is faced with unemployment and expat wives, all the while struggling to overcome culture shock. Is Siddharth’s love enough to help this real life Alice find her way out of Wonderland?"

It is a very breezy read,  you can read it in one go. It is Mythili's story, which begins in present time as she picks up her favourite book, Alice in Wonderland, and then goes to the past couple of years and ends in present time.
What I really liked are the constant connectors to Alice, the names of all chapters and the quotes at their beginnings. I thoroughly enjoyed the way the lines from Alice were woven in the chapters wittily. It makes for a fun read which you would enjoy reading while travelling. I could connect with when she snaps at people who ask her if she eats cows, and that entire conversation is something a lot of us can identify with, because the half information about India that is online, is not ono so far fetched that it is funny, but also ridiculous to the point of disappointment. It is a narrative so you feel like you're actually inside her head, exploring her thoughts and feelings.
What I didn't like, however, was the one dimensional characterisation of almost everybody except Mythili and kind of Siddharth. Everybody else were stereotypical side characters, with little to them but unredeemable qualities which I personally do not like. Also, the references made to both schizophrenia and anorexia, in my opinion, seem to trivialise the diseases.

"Mythili wished she had met Sarah under different circumstances. She would have liked her. She would have liked her even more if she was sure Sarah was completely lesbian. Yes, sad, very sad, but honestly, she would have. Yes, she had a girlfriend, who Mythili was having a hard time identifying as a girl at all. She had short cropped hair, a very square jaw and was dressed in a men’s sweater t-shirt with jeans and sneakers. A pair of thick glasses and absolutely no makeup. She was solid looking and could easily pass for a rather handsome, clean-cut guy. It was her very masculinity that had Mythili on the fence. If Sarah had really switched sides on the gender she preferred to be with, why not be with a girly girl; why a girl who looked like a guy? Didn’t that mean she still liked guys?"
^ This paragraph I found extremely disturbing. And disrespectful. This is obviously a character flaw, and I get it but I got so disconnected from the character and lost what little identification I felt.

1/5
I read a few reviews about this book and I found that people generally liked it, I can see why. Its a continuous flow and it is interesting. Personally, it didn't do anything for me. I didn't quite enjoy it as much as I thought I would after the initial 20 pages.

You can find out more and buy it here.
Posted by Nirati at June 21, 2014
Email ThisBlogThis!Share to TwitterShare to FacebookShare to Pinterest
Labels: Blahblaholic, chick lit, Indireads, journal, Romance, shweta ganesh kumar, travel