Rearview ~ my Roadies journey by Raghu

I see equal parts respect, equal parts loathing. Equal parts Raghu, equal parts the bully. There is a man tall, bald, muscular, intimidating who manages to induce terror and awe in all those who dare walk into his interrogation room.

There was once a boy scrawny, weak, easily intimidated, voice unbroken at fifteen, who was bullied consistently through his childhood. This is the story of how that boy became the man he is today: part-time singer, song-writer and jammer, full-time producer, camera man and editor. Sherlock Holmes and Batman worshipper, staunch atheist with an innate fear of water and heights. This is the autobiography of the rudest man on Indian television. Raghu Ram, the original roadie , split wide open.

This book has been on my list from the month ot was published, bit as they say there is a time for each book that comes to you. Last month on world book day , i purchased this book. It seemed a good choice to read about real people on the day devoted to books.

The book is neither too surprising nor disappointing. It is part amusing and part inspiring for me from the beginning to the end. From being the guy who was bullied much at school to being the biggest bully on TV; it never would have been easy and that journey is something you must read here. I am not a roadies fan , nor has it changed now but i always been a Raghu fan and this book has made that respect for him increase. No one is perfect and Raghu candidly admits his flaws and mistakes over the years. Success does change the way you see the world and more so , they way people treat you. It is up to you how you react and shape yourself. This is as honest ( some places arrogant) as anyone's autobiography could be. At the end , Raghu does inspire so many youth to dream , dare , be different and be known for it by being the best at what you do. And no one can manage or could have made Roadies better than this guy.

The book is not just for a roadie fan but more for the people who treat the show as crap. the hard work and the brain that goea in compiling
India's longest running reality show is beyond imagination. Hats off to the team for their work.

The writing of the book is mostly linear though it branches out some where but nothing too confusing. The language is casual and flows well. I actually imagine some of the dialogues of Raghu in the style he carries on TV and that made the reading experience a little more personal to me. The only thing i did not like about the writing was that end of most chapters , wherever there was some twist , Raghi would warn about it. It would not make sense always, this literary style he used.  All in all, an enjoyable book though it could be little boring in the middle. 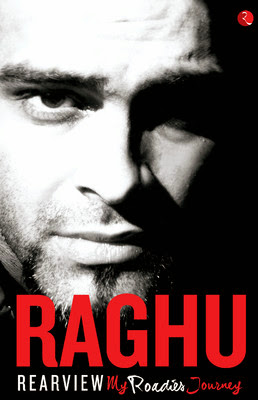 Posted by Pratibha at May 12, 2014
Email ThisBlogThis!Share to TwitterShare to FacebookShare to Pinterest
Labels: autobiography, Raghu ram