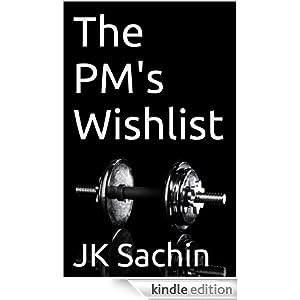 It's election time and everybody is busy speculating about the future Prime Minister of the country.Perhaps to cash in on the election euphoria atleast half a dozen books and feature films with politics as the main theme have come out in the last couple of weeks.So naturally,I had my own reservations and apprehensions while picking up this new political novel for review but after reading this (e-book)book,I am happy that I have been proved wrong.J.K.Sachin's debut work,The PM'S Wishlist is a political thriller which narrates the tale of Sharan Karan,the shrewd and cunning newly elected Prime Minister of the world's largest democracy.
The story is wafer thin.Frankly speaking, the book has only a  'half-decent' plot,(it's more or less like a manual for India's future Prime Minister on 'what to do and what not to do' once he assumes Office)but where it actually scores is in the execution of it's basic concept.Sachin's writing style is also praiseworthy as he has suceeded in keeping the reader hooked to the proceedings from the very first page of the novel.This is that kind of book which has it's heart in the right place and through which the author genuinely tries to bring some sort of 'change' in the society.The writer tries to list the major problems which the country faces and tries to give practical solutions for them.While some of the 'solutions' which Sachin puts forward are intelligent and well thought out(like the idea of security assessment through 'Advantages',Weakness,Vulnerability,Impediments ),a few of them appear too silly and even ridiculous(the concept of evening courts advocating vigilante justice being one among them).
The book isn't entirely flawless either.If you are looking for a fastpaced political thriller in 'The PM'S Wishlist',I'm sure that you will be terribly disappointed.Even the principal characters in the book aren't well etched out.(For instance,the reader never even gets to know how the protagonist,Sharan Karan looks like!- the ploy to keep the appearance of the 'PM' a bit hazy or vague might be a deliberate one but I must say that it didn't work for me).Similarly there are also a couple of grammatical errors which could have been avoided.So instead of calling this work a political thriller,I prefer calling it a socio-political document on the present day India.