This was quite an unusual story for me to begin with. i have read another short story on a djinn long back and had a vague idea what they can do or why they interact with human world. But frankly , this was like a portal to the world that exists and yet you never even get a glimpse of it in your life time. 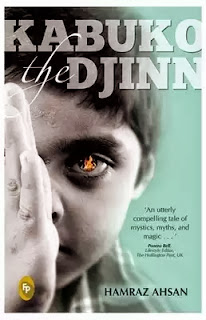 The story follows the life of kabuko djinn who has an unusual desire to learn about humans and all their mysterious ways not just by observation or by posession but by actually dwelling inside a human body, next to the soul and all spirits that exist within us.


The book follows his journey from the moment he decides to embark on his journey , his preparations , his persistence , the failures and finally his moment of joy when he finds for himself the perfect family and the boy to be associated with.


In many ways , it reminded me of of a stubborn person who doesnt know what his decision will lead him to but is still so sure to go to any length to see his idea take a shape.
Kabuko is both naive and wise at the same time.

He learns from ajee's life not just about human life but also enriches it with many experiencesjust by his curiosity.

The people they come across , the experiences , the tales , the mystical events and the changes it brings to oth their life makes an amusing read.  Though a few things may sound unclear or too much of an imagination , but it doesn't need one to be too critical of the book 'cause i beleive that the whole notion of djinns is quite a fanciful one.

overall , this is a fast engaging read ; with some very interesting chapters and a little sad end for kabuko.

Yes , i felt sad for him and hoped his journey was rewarding for him.