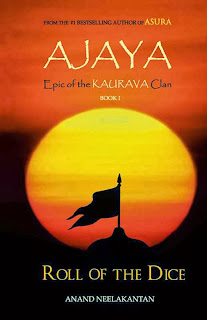 The Title caught my attention. Jaya had put Mahabharata in a new light for me but that was still Pandava side of the story. Ajaya narrates Mahabharata in from the much ignored Kaurava perspective.

At the heart of India's most powerful empire, a revolution is brewing. Bhishma, the noble patriarch of Hastinapura, is struggling to maintain the unity of his empire. On the throne sits Dhritarashtra, the blind King and his foreign born Queen Gandhari. In the shadow of the throne stands Kunti, the Dowager-Queen, burning with ambition to see her firstborn become the ruler, acknowledged by all. And in the wings:


Amidst the chaos, Prince Suyodhana, heir of Hastinapura, stands tall, determined to claim his birthright and act according to his conscience. He is the maker of his own destiny or so he believes. While in the corridors of the Hastinapura palace, a foreign Prince plots to destroy India. And the dice falls.

Did you know that Duryodhana is worshipped in some part of the country? I was in for a surprise when I read the author's note and the book engaged me from that page itself. Moving on to the few chapters available as prelude, I was on the edge reading this book. The story for once shows Bheeshma in a human light! The gripping narrative of Bheeshma's emotions left me in awe. I can't wait for the book to release now!

Participate in Ajaya contest for more chapters
Posted by maithili at November 09, 2013
Email ThisBlogThis!Share to TwitterShare to FacebookShare to Pinterest