Oops! I fell in for Don’s Daughter: Piyush Naik


Writing about your college life has become a trend that very few newcomers break. They all have their eyes on the goal to sell as many copies as they can. Very few of them do try to change the fact that romance not only happens in colleges but schools, offices and what not. Piyush Naik has written a novel that is set against the backdrop of school and how sparks fly.

Oops! I fell in for Don’s Daughter is about a young lad, Piyansh Nigam who joins tuition to cure his ailing Math and bring pride to his family by scoring good marks. As nothing goes as planned, he too looks at a girl and falls in love madly. Luck can never be on the sides of the lovers and he too faces competition and also a chance of serious trouble as the girl’s father is a Don.

The story is about how he woos the girl, makes friends, loses friends and at the end if he does get the girl. The book is not thick and can be completed in 4-5 hours. It can be your traveling 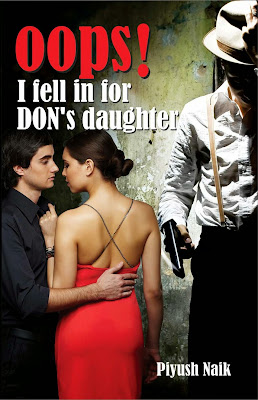 companion if you don’t like thick books. Personally the book was that for me. I took it in the metro and read it for the fun I missed after leaving school and the friends that I will never meet.

Piyush has written a story that has essentially friendship as its protagonist. There is a group of around 6 people and all are couple. They enjoy, hang out and make the best of their school days. The problems are also of today’s youth—parents scanning through phones and asking endless questions, the report card carrying your test scores that can never be made public and what not.

He gets the school part right, what troubles me is the way the story goes from being a romantic comedy to a emotional one in a span of seconds. I would have liked a more fluid transition. The characters motivation sometimes seems unreal and you just don’t get it why he would that or this. Some of the quotes about love or school at large are funny and memorable.

The only drawback of the story is that the language is amateurish and also that Piyush Naik is still a kid. Most of the novel seems like a teenage diary where endless scribbling has been done to justify the story. Even though with the flaws Piyush Naik gives a novel which is funny, at times romantic but mostly it is about school and how much better the life was back then.
Posted by Cliche Writer at October 20, 2013
Email ThisBlogThis!Share to TwitterShare to FacebookShare to Pinterest
Labels: Humor, Oops! I fell in for Don's Daughter, Piyush Naik, Review