Combat Of Shadows by Manohar Malgonkar 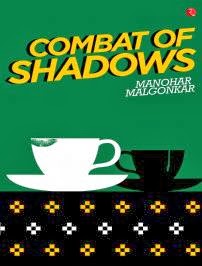 The best part of reading a book which narrates a tale of pre-independence era is the whole experiencing of witnessing the part of India we have never imagined.
The best part of "Combat of Shadows" written by Manohar Malgonkar is that it narrates the story of an Englishman who lived in India and the entire book is structured around the beautiful Assam mountains before the Independence. "Combat of Shadows" is one of the fine novels i have read recently. This novel talks about the whole influence of the western culture into our indian society.

Henry Winton is an English Manager stationed in the Silent hill and is slowly making a positive influence on the people as well as the company. He meets Ruby Miranda, a beautiful Anglo-Indian girl in a gala night and its an instant attraction. He appoints Ruby as a teacher in the plantation school and then he uses her as a mistress more to edge out his loneliness. Ruby on the other hand dreams of becoming his wife and break the shackles of her life and escape into the world where Henry belonged. When Eddie Trevor, lover of Ruby Miranda applies for a job on Silent Hill henry becomes suspicious that Ruby has a hand in giving out information of a vacant post. Furious of knowing that Ruby might still be in love with him he abandons Ruby and goes for a vacation in England and marries Jean. Ruby seeks revenge for his infidelity. Meanwhile the war has enveloped the british empire and Henry seeks desperation to join the war so as to serve his country. And one final task lay before him before he could join forces which is killing an elephant. Eddie trevor and Jane falls in love with each other while Henry could still not tae Ruby out of his mind who is still devastated.

The novel seems to be going in one smooth flow. The command of English portrayed in the book is just a stroke of brilliance. What sets off the most of the book is the unnecessary storyline that is sketched parallel to the tale. The relationship between Jane and Eddie is not explored much and the books seems to be hurried through the last 40 pages. But the stage was set to deliver one of the most clever ending a book can have.

This is book of multi layered romance and lust happening simultaneously. Emotions are strongly depicted and the characters are well sketched. There is an incomplete story of Jugal Kishore which does not adds much worth to the book. The book also points to the many aspects of how the western culture has altered the views of Indian Society. Ruby Miranda does not openly expresses her desires to mend into the english ways and become his wife and uses lust and sex to influence harry into marrying her. Edie trevor seems to be romancing the english man's wife. Many such aspects seems to be so modern now and yet it has been depicted in a tale stretched out in the colonial India period.

At the end of the book i was pretty much impressed with the story and the way it was written. At no point of time it was dragging and many times it was just too flawless to be reading continuously. In a genre of Interracial romance and intercultural relations this book sits on the top like a cherry on a cake.

Also I am thankful that I received this book from Rupa Publications and they gave me a chance to review it.
Posted by Ankit Sharma at October 31, 2013
Email ThisBlogThis!Share to TwitterShare to FacebookShare to Pinterest
Labels: Ankit Sharma, Combat of Shadows, Intercaste, Manohar Malgonkar, Romance, Rupa Publications