A Devil is Waiting by Jack Higgins 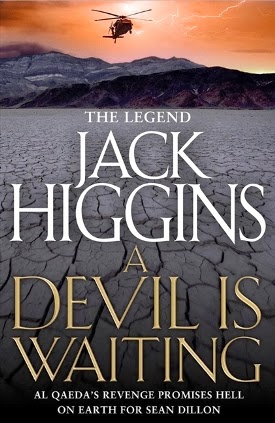 There are certain characters that are quite well known in crime fiction. It's Jack Reacher for Lee Child, Alex Cross for James Patterson, Shane Schofield for Matthew Reilly and Cotton Malone for Steve Berry. In the same way, it's Sean Dillon that is the principal character of action thriller series books authored by Jack Higgins. I'm quite a fan of the character, that no-nonsense, ruthless, carefree killer who is a protector of justice and part of the Prime Minister's personal army, so to speak.
This book however wasn't one of my favorites, so to speak. This is the first book that I've picked up where a main character is missing. On checking, I found she had been killed in a previous book that I missed. Guess the dialogue from the series Castle comes to mind. Perhaps the author got bored of the character. Maybe Hannah Bernstien started to become a little predictable to him. It was sort of a repetitive character, with Dillon's affection for her and her affection for the rules dominating almost every novel's plot and character sketch. That being said, the new characters of Daniel Holley and Sara Gideon were quite interesting. The war background, the similarity in character to Dillon and the love angle between the two new characters was quite nice to read.
The villains Mullah Ali Selim and the Frenchman Henri Legrande were ruthless too, the former especially. The action shifts from the USA to London to Pakistan, and then to Persia etc. much like a Jack Higgins novel usually does. The old known and loved characters like Roper, Ferguson, Blake, Lacey and Parry, all return and play their parts seamlessly. It's a thriller alright!
Did I love it? Yes, I did. Not the best, but it's got quality. Here's to more of Sean Dillon and his antics.