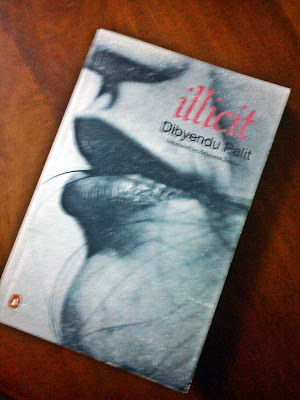 What's that they say about great things coming in small packages? Dibyendu Palit's 'Illicit', translated into English by Arunava Sinha, is just that. With an artistically designed cover and a title like that, the book is a pick-me-up, and thankfully it doesn't disappoint.. ahem... even between the covers. One wouldn't expect any less from Palit, who is a renowned short story writer.

The plot spans just three days and is a slice of the protagonists' illicit life. Jeena, an attractive young housewife is bored of her 'wooden relationship' with much older husband, Ashim. Partha, her neighbour, is married, a father of two, and equally bored in his marital life. We are introduced to them in the high point of their illicit relationship when the two are planning a secret sojourn to Puri. Quelling her self doubts and pangs of guilt, Jeena takes the bold step to be with Partha.

In the next three days that Jeena spends with Partha, she discovers that all is not as it seems. Partha's lust takes an aggressive turn and Jeena feels violated. Beguiled by shame, self pity and doubt, she decides to head back home and put to an end everything illicit.

Illicit is a deliberate and intense book. The author takes his time to build upon his Jeena's guilt, purposefully punctuating it with the mundane. We see her squirm uncomfortably under the weight of her feelings one moment and pondering upon a cup of tea the next. Now she is losing sleep calculating her risks and now she is flowing with the moment. Palit's skill is apparent in the way he juxtaposes these contrasting elements, much like real life. He takes no moral stance and simply tells the story of the greatest kind of conflict - one that a person has with himself.

The language is simple and accessible; at least the translator, Arunava Sinha, makes it seem so. The lucid prose makes for easy yet thought-provoking reading. Palit is a gifted writer for he leaves you sighing at love's (sometimes) futile cause at the end of its 128 pages.