If You Could See Me Now- Cecelia Ahern. 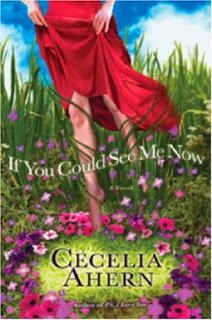 Synopsis (As given behind the book)-

Elizabeth Egan's life runs on order: Both her home and her emotions are arranged just so, with little room for spontaneity. It's how she counteracts the chaos of her family -- an alcoholic mother who left when she was young, an emotionally distant father, and a free-spirited sister, who seems to be following in their mother's footsteps, leaving her own six-yearold son, Luke, in Elizabeth's care. When Ivan, Luke's mysterious new grown-up friend, enters the picture, Elizabeth doesnt know quite what to make of him. With his penchant for adventure and colourful take on things large and small, Ivan opens Elizabeth's eyes to a whole new way of living. But is it for real? Is Ivan for real?

I know what you’re thinking. For a genre like romance, why choose an author like Cecelia Ahern? But don’t. Don’t judge a book by its cover. Read the review. The reason I chose this book is because it is beautiful. It is filled with fantasy and is romance escapism.

Elizabeth is a fastidious interior decorator. She lives a life of monotony and routine. She has always been the responsible one in her family. As a child, her mother abandoned her family leaving her to take care of her younger sister. Her father is still awaiting his wife’s return. Her younger sister is an alcoholic whose child, Luke is left in care with Elizabeth. Elizabeth tries her best to get along with Luke but the burden of responsibility has her tightly wound up and in this she has forgotten how to enjoy herself.

When Ivan from 'Ekam Eveileb' comes to visit Luke, Elizabeth feels Luke is making him up as little children do sometimes. She treats him as Luke’s imaginary friend and ignores the situation most of the time.  After a while, she begins to see him but still treats him as the father of a friend of Luke. As time goes by, the focus of the book shifts from the relationship of Luke and Ivan to Elizabeth and Ivan.  Their relationship graduates from that of friendship to love. He helps her rediscover herself, get rid of all her inhibitions and generally let loose. She starts to believe in fairy tales again, in love again.

As the relationship blossoms, Ivan goes to his boss Opal for advice. He has fallen in love with her. This is where we find out that he was her imaginary friend. The same person that only she and Luke could see. In that world, imaginary friends can only exist till the person NEEDS them. When they blossom as people even if they still want their imaginary friends they can’t have them as they disappear and throw themselves into helping someone else. Opal tells Ivan that there is no point of pursuing this relationship because unlike him Elizabeth will grow old and eventually stop seeing him (in the literal sense).

Yes, the end is slightly tragic. But don’t all the immortal love stories end tragically? Ivan slowly fades in Elizabeth’s eyes and he visits her in a dream, telling her why he has to leave. They end up together without each other. Thus ends the magical journey back home. Back home to childhood, back home to oneself. Free from everything yet bonded to something.

The best about this book is that although the theme seems childish, it isn’t. It really has quite a deep meaning to it and if you can read between the complexities and layers of the book, you’re sure to enjoy it.

·          “She likened it to a childhood crush, such strong almost obsessive feelings, but more, it had depth. She felt attracted to everything about him, the way he talked, the way he dressed, the words he used, his apparent innocence. Yet he was filled with a deep knowledge of wise insights. He always said the right things, even when she didn't want to hear them. The darkness lifted and she could suddenly see beyond. When he breezed into the room, he brought clarity and brightness with him. He was walking hope and she could tell that things for her be… not fantastic or wonderful or happily ever after, but that they could be okay. And that was enough.”

·          “You've come to give me a piece of your mind, I repeated, looking at her. "You know that phrase is really beautiful. The mind is the most powerful thing in the body, you know, whatever the mind believes, the body can achieve. So to give someone a piece of it...well, thank you, Elizabeth. Funny how people are always intent on giving it to the people they dislike when it really should be for the ones they love. There's another funny thing. But a piece of your mind...what a gift that would be." I looped the last stalk and formed a chain. "I'll give you a daisy chain in return for a piece of your mind." I slid the bracelet onto her arm.
She sat on the grass. Didn't move, didn't say anything, just looked at her daisy chain. Then she smiled and when she spoke her voice was soft. "Has anyone ever been mad at you for more than five minutes."
I looked at my watch. "Yes. You, from the o'clock this morning until now.”