The Prayer of the Frog, Vol 2. by Fr. Anthony de Mello 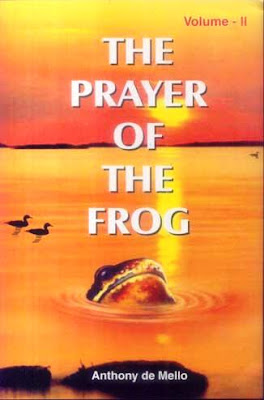 
Father Anthony “Tony” de Mello was a Jesuit priest and psychotherapist who became widely known for his books on spirituality. An internationally acclaimed spiritual guide, writer and public speaker, de Mello hosted many spiritual conferences.
My thoughts:
Usually, non-fiction genre and my bookshelf are miles apart, but of late, more seem to be finding their way into it. The latest acquisitions, courtesy my local library, were two books on spiritualism, by Fr. Anthony de Mello.
Books on spiritualism are to be read slowly, they say. I understand that, and I’ve taken it as slow as I can. The book continues the wisdom of Volume 1.
Education should not be a preparation for life; it should be life. I think that has been one of the best quotes I have read. And the example used to illustrate it has been worth it as well. It was something I could relate to as a writer. The words expressed, for being a writer, you should just go write, not prepare for writing.
Another witty lesson was the one with the girl and the banana peel. It was humorous, but also showed that not all things can come back once gone, and we shouldn't fret on it.
All of us want to live atleast another day. This was illustrated by the story of the man who saved another year of his life by promising to make a horse fly!
But the one I liked the most was the idea that our walls are only mental, not physical. A bear in a cage paced up and down the twenty feet of the cage length. Even after the cage was removed years later, it continued pacing just that twenty feet. It showed that once we are fearful or trapped, the effect might linger longer than we think.
Once again, I'd recommend the read, but it is not to be absorbed at once. A slow read would best be suited.