The Prayer of the Frog, Vol 1. by Fr. Anthony de Mello 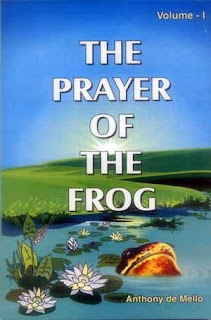 About the author:
Father Anthony “Tony” de Mello was a Jesuit priest and psychotherapist who became widely known for his books on spirituality. An internationally acclaimed spiritual guide, writer and public speaker, de Mello hosted many spiritual conferences.

Usually, non-fiction genre and my bookshelf are miles apart, but of late, more seem to be finding their way into it. The latest acquisitions, courtesy my local library, were two books on spiritualism, by Fr. Anthony de Mello.
Books on spiritualism are to be read slowly, they say. I understand that, and I’ve taken it as slow as I can. The book is divided into eight parts.
My favorite part is the one where Sage Narada’s arrogance is punctured by Lord Vishnu. It showed that even when we are most busy, and occupied with our lives, if we invoke God, then God will hear us. That God knows we love him.
The second part is Awareness, wherein the part about “evident” was something that was thought provoking. In our life, we often express our opinion even when it is not needed. Sometimes we are right, sometimes not. This part showed in a different way, that what is evident to us may not be the truth always.
Another story is the story of belief. Most of us do believe in God, at least as a universal entity, if not by one name or religion. The story of Providence shows us belief in a different sense. It is the story of a priest who believed that God will save him, and refused to be saved by three rescue boats when a dam burst and his town was flooded. When on reaching Heaven, he asked God about why He didn’t come to save him, God replied that He did send three rescue boats. He always sends his grace and blessings, but we should understand that it might not be in a way that we expect it to be.
I could share my thoughts on many such gems of wisdom in this book, but then, the post would end up a mile long. If you chance upon this book, my suggestion would be to read it slowly, and let the meaning find you, rather than you finding the meaning. It might not come on the first read, or even the second. But it is a search that is worth doing I feel.
Book details:
Title: The Prayer of the Frog Volume 1
Author: Fr. Anthony de Mello
ISBN: 9788187886259
Genre: Non-fiction, Spiritualism
Publishers: Gujarat Sahitya Prakash