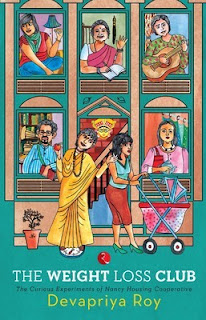 Set in a middle-class housing colony, this is the story of stay-at-home mum Monalisa, who cannot clean the kitchen counter enough times; Meera, who is bullied constantly by her traditional mother-in-law; college-going Abeer, who isn't sure how to impress the glamorous Mandy; academic Aparajita, who has no takers on the marriage mart; philosopher Ananda, whom no one takes seriously; and Treeza, a former school secretary now sunk in gloom. Into their midst arrives Oxford-returned Sandhya: half hippie, half saadhvi, full spiritual guru. Under her aegis is formed The Weight Loss Club, throwing the lives of our heroes and heroines into utter and delightful disarray.

But while chemistry brews and equations change, one question remains: who is Brahmacharini Sandhya, and why on earth has she moved into Nancy Housing Cooperative?

What made me pick this book for review was not only the plot but also the cover. I rarely read fiction which is wholly set in a society or a household. It involves knowing the past and present of every member in such details that even their silence or absence in a scene makes sense.

The weight loss club is no ordinary drama that follows a pattern , but it more so like a tale in wraps of the lives led by people inhabiting the society. Right from how the society got its name to the people living in the building, the novel hooks you. But the book title doesn't make absolute sense , not till the middle of the book when it is casually mentioned and then sticks to the people of the society who follow Sandhya's wise words and instructions.

No family is perfect , not as much as it looks to the people who don't know better. This is something which neither shock you or nor was it expected but it just makes sense. It makes sense , how people react to situations , how people are known to others and how well they respond to the chances given to them to make a difference not just to their life but to others too. Weight Loss club is hopefully warm , adorably nice and yet a vulnerable set of people , normal people who have their own dreams and desires from life.

One an immediately think of some one who would be like the character you read about or you would secretly smile at something you would have said or done the same way. Apu's love for food ( and food dreams ) , her mother's efforts to make her lose weight and find a NRI to marry her off ,  Monalisa's obsession with his sons and her fears , John 's patience with his wife Treeza who has her own secret grief to come to terms with , all this is a part of our life too at one point or another.

Another fact i realized while reading this is that I love books based in Calcutta. This is the third book I have read and I enjoy reading about the festive times there. [ Guess  the year end vacation might take me to this city finally ]

While the book came to an end , I was reminded of Manju Kapoor's Home which has nothing in common with this one, after her book , this is the first time I loved being a part of someone's universe so much. Nancy Housing Society will be missed for few days. Till I get another such book in hands.

This review is on request by Rupa publications , but the views are all mine.