The Sea of Innocence by Kishwar Desai 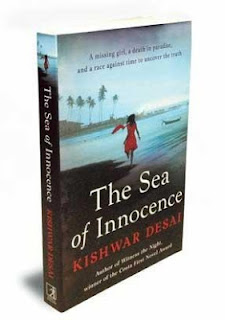 I don't usually read mysteries or thrillers because I do not find much in them to 'take home'. But an occasional read between heavy books serves as good refreshment, given that most mysteries are sharply written and are very pacy. If nothing, a Sidney Sheldon or a Robert Ludlum promise adrenaline-fulled entertainment. But not so a Kishwar Desai. In fact, not only is Desai not like those masters, she's downright BORING. I don't remember the last time it took me THIS long to finish a mystery.

From what I understand, The Sea of Innocence is the third of her Simran Singh series - a 40-something social worker who moonlights as a detective. Desai's first book, Witness the Night won the Costa First Novel Award, which was then followed by Origins of Love. I haven't read the first two, but after this book, I don't think I'll ever read anything by her again.

Inspired by the much publicised case of British tourist, Scarlett Keeling, who was raped and murdered on the beaches of Goa, The Sea of Innocence tries to depict the darker side of the sunny town. Goa's dark underbelly could have made a great setting for a crime thriller, but Desai fails to use it to her advantage. The book is painfully slow, even though she has thrown in all elements like drug-fuelled parties, beaches, holiday romances, ageing Hippies, politicians, power games and even rape tapes!

The feminists may come at me with pitchforks, but Desai 'talks too much'. As I trudged along its pages, I couldn't help comparing her with male authors, whose books seem to have so much more action. And don't even bring up Agatha Christie, okay? The book often sounds like a long rant about the single Simran's weight problems, her failed loves and mommy issues. There are lengthy monologue-y stretches and you want to shake her up and ask her to DO SOMETHING!

The plot is fairly simple; a young British girl goes missing from the beaches of Goa, and a year later, videos of her surface. The case is reopened unofficially, with Simran starting a covert investigation at her ex cop boyfriend's behest. Simran meets the missing girl's sister, Marian, who also implores her to help find her 16-year-old sibling, Lisa. Following trails and anonymous video clues, Simran discovers that the disappearance has to do with a drug cartel and that powerful men are involved.

Desai manages to keep the suspense till the end, but the plot is stretched so thin, that by the end of it, you don't really care. Most of it is predictable, but one must give her points for a scary twist in the end. The story, however, is wrapped up very shoddily, and the last few pages seem to have been written in a hurry.

The jacket of the book quotes the Telegraph praising the book as being 'Terrific'. My verdict is different by just three letters: Terrible.