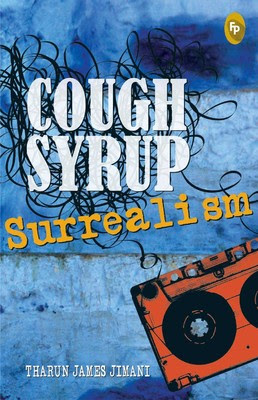 Sometimes, it just happens that a book appeals to you, not because of the plot or the blurb, but the title. Surrealism is a big concept in itself, that combined with a simple thing like cough syrup piqued my interest. The blurb of the book had me a little confused with the usage of the word depressive, but the idea of an imaginary friend and such definitely got my attention further and I felt it would be an interesting read, which it was.

What Tharun does is take some uncomfortable topics for Indian writers (atleast, they usually are) like sex and drugs and mix it with a family drama, which I am sure quite a few of us might relate to, with parental pressure and dreams and the emotional atyachar that happens. I think those emotions that one undergoes during that phase have been beautifully brought out. What also appealed to me was the philosophy that’s spread through the book, mostly coming from Mao or Paloma or Sania, and almost always directed at Charlie. Somehow, it just fit. Charlie’s confusion between emotions… is he in love, or is it just a crush, should he tell Paloma about it etc. also comes out nicely. Even the thoughts as he is under the influence of drugs also is done justice, that unsurity and memory lapses etc. are quite clear through the narration.

I think the timelines in the various Facebook statuses is confusing. Though innovative and reflective of the time and trends during that time, it didn’t work as well as it could have maybe. Another small error I could catch was that the couple watch Kal Ho Na Ho movie in the theater in 2006, whereas the movie released in late 2003, and it wouldn’t have been in theaters at that particular time. Sania’s facebook names are spelt differently in places (though that may not be an error per se) and I don’t know, trend or no, if kids added parents and aunts etc. to Gtalk and Facebook those days, especially when you are living a second life that the family might be unaware of. Didn't quite understand the ending either (like it was all a figment of Charlie's imagination or something. Not sure)

I think this is one of those books that few may like and few may not. I liked it for the most part, but it isn’t something I’d read completely again. Maybe just go to the philosophy, which was what appealed to me most. Overall, a decent debut, and I would read his future novels as well, when they come.

Reviewed for Fingerprint Publishing, to whom I offer thanks for the review copy