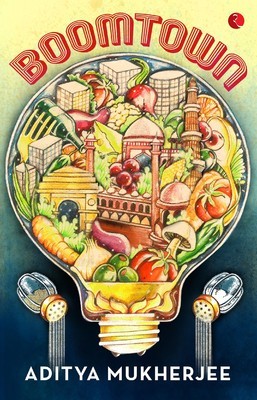 About the author:
Aditya Mukherjee, an alumnus of IIM Bangalore, works for a management consulting firm in Delhi. This is his debut novel.

Thoughts from cover and blurb:
It could be good, or it could be boring. It depends on how the narration is. The cover page design is very beautiful, and right on the idea (no pun intended) put forth by the blurb.

My thoughts on the book:
I’m a self-confessed foodie! I can’t cook to save my life possibly, but I like being in the kitchen, I like seeing food shows like Masterchef and I like imagining the aroma of the foods that I can only see on the screen! So this book, with a young chef in Jaaved trying to innovate on traditional recipes right in the prologue, got off to the right start as far as I’m concerned. You could almost imagine the scene, the effort that Jaaved was putting in, his nervousness and his care. You could feel his heart racing, wondering if he would be found out, and his heart in his mouth moment when the doors open asking for the chef who made the dish!

Enter Jacob James (JJ)! Plump, short and from a rich family, he finds the slight difference in Jaaved’s dish to the traditional recipe and his venture starts there. JJ would mostly not wow you with his character… he’s careless, reckless, unemotional to the extreme at times, but he’s determined. He’s determined to chase a goal, or a dream, or maybe it was just a spur of the moment idea, and open a chain of restaurants. But he can’t do it alone, and his first recruit is Jaaved, grandson of a famous hotelier.

He needs someone who can do the talking, the presentations, the (ermm…) work! He finds his old classmate Karthik Roy, who’s very recently been fired from his software company, and convinces him to join his team. Karthik is the sweet, silent, innocent fella who tries to, but can’t say no to JJ. Or maybe it’s just the convincing skills of JJ, whatever, I’ll leave that to you to figure out.

The last of the entrepreneurs is Sheetal, who already manages a successful restaurant and after thinking on JJ’s proposal for awhile, agrees to join the venture. She’s a single mom, hard working, very business minded and hard on the decisions. She’s also sweet to those people she cares about, and honest as well.

The novel is a light read. And it works, works really well I feel. Language is easy to follow, the narration makes it very easy to imagine and the characters are true to who they are supposed to be. I’m no entrepreneur, but this felt the real deal, because it doesn’t just start with an idea for a restaurant, and voila, they make their dreams come true in the next chapter. It had the essence of business. The rejection of their ideas, their decision to give their lives a backseat and start pursuing that dream, to begin somewhere so they can show the disbelievers they can reach somewhere, how they handle the politics in their venture, the difficulties in getting the right combination to success! Everything is there! There’s a little romance thrown in the works too, and it works because it doesn’t overwhelm the actual plot of the book. There’s a family drama too, with the society’s idea of what’s great as a career and what’s not playing a part. I enjoyed this very much, and I feel it was a brilliant debut. It goes into my favorites list and to-be-read-again bookshelf! Kudos!

I’m still wondering about the title though… why is this novel called Boomtown?!

This was reviewed for Rupa Publishers, who I thank for the review copy. No other payment was taken for this review.