I will begin this review with a quote, which has got nothing to do with the book. It is by one of my favourite writers, whose writing style is something I have always tried to learn from.

"People ask me why my style is so simple. It is, in fact, deceptively simple, for no two sentences are alike. It is clarity I am trying to attain, not simplicity. Of course, some people want literature to be difficult and there are writers who like to make their readers toil and sweat. They hope to be taken more seriously that way. I have always tried to achieve prose that is easy and conversational. And those who think its simple should try it for themselves." - Ruskin Bond
In my entire journey with Baker's Dozen, this fond quotation was ringing in my head. Not because I wasn't enjoying what I was reading, but because I was applying a lot of my brains into understanding thoughts which I would much rather flow with. Writing in a fashion which is complicated and extravagant is perhaps the order of the day, and it carries with it streaks of brilliance too, but it is not something which gives you the comfort of book you may snuggle in the bed with. This, I am saying despite having enjoyed the ELLE Tranquebar book of short stories thoroughly. 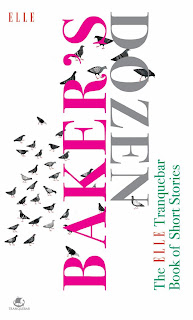 Baker's Dozen is the kind of book which enchants you from the time you receive it in your hand. The minimal art-work on the cover, and the thought behind the title are the first things you marvel at, and the ride promises to get better. Contrary to what one might expect, it is not a collection of 12 tales, rather, it has 13 hand-picked short stories - the 13th thrown in for good luck, just like bakers traditionally would do with a loaf of bread. The stories come divided into two sections - one by ELLE and the other by Tranquebar- and both sections have stories which are gem-like in their sparkle. I remember being a little harried with the plot of the first story, only to become a big fan of the author,Sharanya Manivannan later. Her story, Greed and the Gandhi Quartet is nothing like what you might have ever read in the name of short fiction, ever. Her narrative is in the form of a conversation, leading to a richer storyline at the backdrop of it all. Something to learn, something to simply be impressed by, something also to connect with.The story which falls second on the list of my favourites from this book is The Howling Waves of Tranquebarby Madhulika Liddle. It is a story whose end did not surprise - but the craftiness and imagination of the author deserve a full score. Set in an eerie locale, this story takes the reader from shivers to amusement - and it one of the most amazing examples of good and effective story telling.Baani and Salted Cashews, by Payal Mukherjee and Divya Sreedharan respectively, take up compelling social issues and create a hard-hitting narrative about them. Salted Cashews tells you about the kind of perversion which exists in our society at a subterranean level, capable of and successful in robbing of the innocence and gaiety of childhood. Baani takes one to the world of refugees, their struggles with life on a daily basis. You will find other stories in this anthology throwing light on various facets of existence, including love, including sexual advances at workplaces, including dreams and desires, and so much more.To state in a single sentence - this is a thoroughly enjoyable book, a collectible, where no two stories are alike, where you need breathing space while hopping from one tale to the next and where, you will end up being enamoured by the kind of writing talent which exists in India. My only problem with the book is its often cryptic, high-flown language. I will admit, I tried hard but could not complete Mridula Koshy's stories at the end. I am the kind who stubbornly pursues even a very boring novel just for the satisfaction of having finished it. And these were short stories I abandoned. They might be stylistically brilliant, but they do little to prove that good literature is the one which needs to be embellished with incomprehensible narration. Literature is supposed to reach out, to touch, to perhaps also reform - a little simplicity in telling a tale in what I would earnestly hope for in future stories which come my way.It could've easily been a 4+ star book for me, but just for the amount it made me toil, I think I would settle with 3.5 on 5 stars.