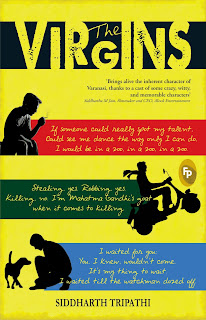 
From the book cover:

With six unmarried sisters and a perennially drunk father, Pinku, a 19 year old school dropout, has only one dream left: to marry the plump girl who'd caught him stealing flowerpots. His friend and confidant, 17 year old Bhandu, is not faring any better- his parents are divorcing, his father has abandoned him, and the American tourist he is infatuated with doesn't even know he exists. Bhandu and Pinku seek solace in the distracting shenanigans of their friend Guggi- a pampered rich brat who can do anything for a thrill. Guggi's reckless hedonism lands the threesome in a series of 'sexpot' escapades- each adventure weirder than the one before.
But their seemingly innocuous joyride is about to end.
With their Class 12 exams around the corner, Guggi, restless to leave a mark, takes over the school's notorious protection racket in a violent coup. The fallout drags the trio into a murky world of heartbreak, betrayal, and bloody vengeance...

Excerpts
Dog wags tongue;
There's a dogess around,
Bull takes out organ;
Where's the cow hidden?
- Poem written by Thakur Gajendra Saran Singh (Guggi)
(standard 3; English Class; Suspension: two days)
Guggi was famous for his 'sexpot' plans.
Any plan Guggi described as 'sexpot' involved something against the law and had the following traits, best illustrated through an example:
Sexpot Plan #1719: Do the grass-cutting woman at MG stadium.

With a title like "The Virgins", the book does promise a lot of things. Not all of them are fulfilled. The book is supposed to be about "coming of age"- which sadly not given its due. The book attempts to be a lot of things which is the reason why it fails to make an impression.
The three protagonist are so markedly different that it is difficult to imagine why they would stick together.

Pinku- The 19 yr dropout whose life looks like a depressing plot. Sarju, his father, is a drunkard who has made sudden appearance after years of absence. His 6 sisters and mother are equally depressing except for the youngest sister Mimmi who is Pinku's only solace.
Bhandu- His parents are headed for divorce. His grandparents write to him regularly but he does not read the letters! Bhandu  is supposed to be studying hard to get into engineering and is the one with a good future ahead but instead spends his time listening to songs and with Guggi and Pinku.
Guggi- His father is a landlord and so was his grandfather. He is a spoilt brat who is trying to operate a protection racket. At the same time he wants to score good marks to impress his father. Really?

There are other characters like Moods Singh, Varjesh Bhaiyya, Mannu Garg, Chacchu Bhaiya who are more interesting than the main protagonists! Their story is actually more interesting to read than the "sexpot" plans of Guggi and his friends.

What I like:
The chapters are short and aren't stretched. Each chapter starts with a small verse imagined to be written by one of the characters (although sometimes unrelated to the chapter)
It traces the growing up in a small town which is a fresh thing to read. The people and their mentality in small town is depicted well in their lines. The book does paint a beautiful picture of the life in Varansi and the trips to various locations there in. Characters like Moods Singh and Thakur Deen Dayal( Guggi's grandfather) bring humor and lightness to the story.
The protection racket which starts in schools was indeed a new thing to read. The school politics was another novelty.
The book tries to break the mold of campus stories and dramas which is another reason why it stands out.
The author has a unique way of narrating the story through the eyes of different protagonists and there is a sense of incompleteness which seems deliberate. You keep wondering what the lines implied. I was left wondering what happened to the characters at the end!

What I didn't like:
Too many plots going on. The books lacks a tight script. The story lacks continuity because of the excessive characters talking here and there and a few "not really necessary"chapters.
What in the name of heaven  is "Mogambo Vagina" that Bhandu keeps repeating in every line?
Is it just me who feels that a sexpot plan to "rape" a grass-cutting woman is not exactly innocuous?
We all know boys use a lot of abusive words but that doesn't mean every line in the first part has to be full of explicit words. After a point, I started skipping lines :P

Posted by maithili at June 19, 2013
Email ThisBlogThis!Share to TwitterShare to FacebookShare to Pinterest
Labels: Maithili