The Redeemers, by Suresh Taneja 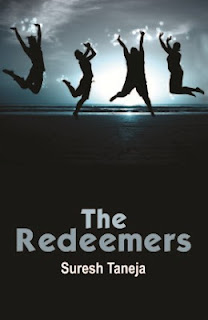 About the author:
Suresh Taneja is a chartered accountant by profession. He published his first book, “We Can Pull It Off” and this book is an improved version of that. He wishes more youth read it, and believes that the youth have a very important role to play in the development of India.

My thoughts on the cover design:
It feels casual, like a light read is implied. Gives out a projection of excitement and enthusiasm.

My impressions from the blurb:
Well, if Suresh’s belief is that youth should play a part in the country’s future, the novel seems to be a reflection of that. A story of youth who have set out to make a change.

My review:
Well, we begin at a time in the future, 2030 to be exact, where things have turned on their head. There is a young Indian ambassador to the US, and India is the leading superpower in the world. Indian companies have become THE brand abroad and such. We’re introduced to a closely knit group of four friends and their families, who are currently holidaying in the United States. This group (G4) are part of the initial revolution that changed India and got them to where they are now. Chapter by chapter from this point, we are taken back and forth in time to see what started it all, and how the change came about.

This book is inspiring, and calls for action from the youth to battle and conquer corruption that has taken over our country, and left it, as rightfully said on the blurb, in a shameful state. It tells us that small things and prompt thinking can help bring about that change, as shown when young Yuvika’s prompt thinking prevents her family from being unjustly accused and charged with murder. It also tells us change might not happen overnight, but working toward it can make it more possible that we feel it is now, to implement the good ideas we might have for changing the nation is also important. Lastly, it also shows we need to have dreams and believe in them, and we should be given that space to believe in them rather than other dreams pushed in, so they become true.

On the downside, editing lacked. A major mistake was Kolkata being spelt with a double t. It is in the future and by that time, another t might be added for all I know, but felt very odd. It also was very off-putting to read the sentences like “G4 initiated discussion with G3” or “G6 wished in chorus” etc. To show that all of the group said it felt wrong. Perhaps it might have been better to put it like one of them wished and the other followed in chorus, or one by one. And also, though they are known as a group like the parents together as G6, fathers alone as G3 and the four of them as G4, just using the group names felt seriously strange. Similarly with the discussion, when political parties was discussed. Names to the parties brings a more realistic feel to it. Things like India’s state of domination in 2030, with us lending huge amount of money to the Americans felt nice, but to be frank, it also felt unrealistic given the pace of development we are currently at. One suggestion from my side is that rather than starting out with India as a fully developed, global superpower, what might have been more apt is for the story to start in the present and go along from there till 2030. That, and being narrated from the point of view of G4 members, like one chapter from Yuvika, the next from Vikram etc., might have made it more effective and touching, rather than starting out with all is fine and narrating the past to their already awestruck children.

The Redeemers is a feel good story that leaves us wondering if we are asking the right questions and how the onus is on us to ask the right ones and be the stepping stone for change.

Shared with:
1. First Reads at b00k r3vi3ws
2. Indian Quills at The Tales Pensieve

This was an author-requested review. I thank Suresh Taneja for the review copy.